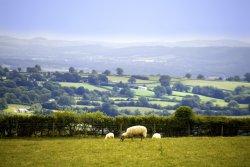 Hereford
Did you know that under an old - and legend has it - un-repealed law it is it seems (in theory) legal to shoot a Welshman on a Sunday in Hereford, provided its with a longbow and within the Cathedral close? Which seems a trifle harsh, especially given the longbow was perfected by the Welsh. We strongly suggest you dont test the law!
Did you know that Herefords Bulmers factory is the largest cider making factory in the world? It contains the worlds largest vat too  stainless steel tanks installed in 1975 hold 15 million gallons of cider! Thats a hell of a student party.
Ledbury
Did you know that for a brief period before WWI Dymock near Ledbury could call itself the epicentre of new English poetry? Rupert Brooke moved there in 1913, as later in the year did the American Robert Frost; Lascelles Abercrombie had been the first artistic arrival in the village two years earlier; John Drinkwater came with Brooke; and Wilfrid Gibson and Edward Thomas completed the group.