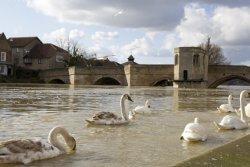 Proposing Huntingdon as a destination for January partly because it is easy to get to sounds like damning with faint praise, which is certainly not intended. But over recent years Britains winter weather has shown its teeth, and ease of access is something to be considered seriously: Huntingdon stands beside both the A1 and the A14 trunk roads, so approaches from the four points of the compass are all covered; and rail is an option, with Huntingdon a mainline stop.

The area has a lot more going for it than that, though, even in January. Just the history of the place is reason enough to visit: museum dedicated to Old Ironsides; and he farmed in nearby St Ives. Between Huntingdon and St Neots (which houses another good museum worth a detour) stands the magnificent 12th century Buckden Towers, where Katherine of Aragon passed some of her last years, just one of a list of royal visitors. There is living history here too: Houghton Watermill conserved by the National Trust gives a glimpse of an activity vital since time immemorial; and the Chapel on the Bridge in St Ives is a rare survival of a once common architectural feature. And living, breathing, supping history is there to be seen in some of the historic hostelries like The Old Ferryboat Inn which has a claim to be the oldest in England  parts dated to the 6th century.

For architectural highlights  dont forget the camera  you shouldnt miss out on Godmanchester, which has plenty of Georgian gems and some from the Stewart century. Island Hall built in 1740 is particularly fine, and can be visited by arrangement, its Chinese Bridge (a 20th century copy of the 18th century original) a must-see.

For those of a sporting turn, Huntingdon Racecourse has three short meets in the month in 2011; or if you are very lucky (or unlucky depending on your viewpoint) and the weather gets particularly cold, the World Fen Skating Championships may take place as they did in 2010  Bury Fen near Bluntisham one of the potential venues. Fly-fishers will gravitate towards the renowned sport at Grafham Water ice permitting  its a nature reserve too with some nice trails so a good place to stretch the legs if you arent going to dip a line in the lake; Paxton Pits north of St Neots is another reserve worthy of mention; likewise Fen Draytons to the east of the area.

This is a region full of little villages like Willingham and the aforementioned Houghton, each worthy of a stroll and maybe a pint. Timber-frame houses dot village streets; with ancient churches like St Marys at Buckden standing over them. And it has some fine stretches of river and riverside  The Great Ouse and the Nene flowing through the district.

If you are visiting this homeland of market towns it makes sense to visit a market: St Ives has an extensive central market ground, full of stalls on Mondays and Fridays. St Neots, Huntingdon and St Ives all have farmers markets too, and markets always have good pubs nearby to cater for traders and buyers alike  a winter warmer may be called for if the cold hits again (or even if it doesnt, youre on a break after all).

Information Britain has details of the accommodation on offer in this little corner of England paradoxically near its centre: the many country inns, comfy pubs, and welcoming hotels where you can put your feet up after a busy day doing as little as you feel morally permissible. Should you feel energetic then Cambridge and its colleges (and shops) is a short drive away along the A14; but having slipped into a relaxed mood the Bridge of Sighs there may be a bridge too far.