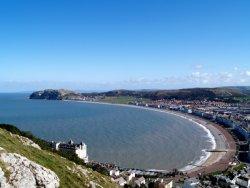 The Welsh and those of us who live in Englands North West already love the elegant Victorian seaside resort of Llandudno, but we really should share it with more people from further afield. Perversely if Llandudno - wide streets, beautiful protected bay, and grand architecture - were French or Italian rather than in North Wales it would already be better known to the rest of Britain.

May is a great month to make for the town on the Conwy Coast, with the Victorian Extravaganza held over the early May Bank Holiday weekend  there are street events, traditional fair and a vintage transport parade to enjoy along with other attractions. If you fancy something quieter, then come a little later, or make the town your base for trips to sleepier Conwy or Snowdonia.

There is a nice balance to Llandudno. For kids the sandy beach could provide the highlight (an economic one for parents too); for grandparents the pier may be a bigger draw; and everyone will enjoy the cable-driven tramway to the Great Orme (and those not suffering from vertigo will love the mile long cable car ride from Happy Valley to that headlands summit).

History buffs will make for Great Ormes ancient church and even more ancient copper mines; culture vultures to Llandudnos museums and Venue Cymru to take in ballet, comedy or a musical.

Llandudno can offer similar variety in its accommodation  Information Britain has more than 80 places to stay in and around the town. Traditionalists may go for the imposing Victorian structures that adorn the place, with suitable period names: The Imperial; St Georges, The Royal; The Grand; The Ambassador; The Regency Royal; The Esplanade... Or those with a taste for contemporary boutique stays can opt for Escape B&B; if you fancy a bit of pampering make for Bodysgallen Hall and Spa which has rooms and cottages in its extensive grounds  or if the cottage idea without the spa bit grabs you, Welcome Cottages, Quality Cottages, and Baron Hill Cottages all have properties in the area.

For visitors planning to spend as much time as possible on the beach  and what self-respecting dad can look at those sands and not want to direct his progeny in mini civil engineering work  Llandudno has plenty of places just a stride or two away: The Min-Y-Don; The Trevone; and the multiple award winning St Tudno Hotel. This year May seems to hold the promise of sunshine: what could be more pleasant than a stroll on the promenade; seafood devoured in Llandudnos restaurants with the benefit of a salt-air appetite; and perhaps some vigorous exercise afterwards on the Marine Drive to reach the tip of Great Orme and take in the views? And you dont need to worry that some volcano in Iceland could make getting home a misery. Brilliant.