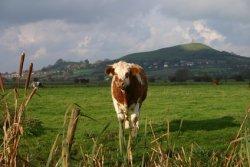 The Somerset Levels are one of Britains less well-known jewels. Delineated by the Mendips to the north, Bridgwater Bay to the west, and the Quantocks in the south the predominant grasslands stretch from the Bristol Channel to Glastonbury. Bridgwater, Burnham-on-Sea and Glastonbury are the only large-ish towns in the Levels, which is sparsely populated, though pretty villages abound  many with pubs and cottages youll find in our accommodation guide.

Thanks to the M5 which runs through the area, the Somerset Levels are easy to reach by car: 2 hours 45 minutes from London; 2 hours from Birmingham; 3 hours 15 minutes from Manchester. But quit the motorway and youre in another world  a pretty flat one too, ideal for bikes. There are plenty of reasons to spend time in the Levels  here are four for starters: their unique heritage; historic events there which have shaped the nation; the seaside; and birding.

As regards heritage, until modern times the Levels were a great wetland, regularly flooded by the sea. The life that landscape engendered is celebrated at places like The Willows and Wetlands Visitor Centre at Stoke St Gregory  willow is still commercially grown in the district and youll find plenty of artisan basket-ware around. The Langport and River Parrett Visitor Centre gives an insight into the distant past, as does a trip to Wookey Hole; or visit Westonzoyland Pumping Station Museum which highlights the area in the age of steam. And taste some heritage at The Somerset Cider Brandy Company near Kingsbury Episcopi, where youll find cider and spirit distilled from it. Standing next to a cider orchard Riverside Grange near Glastonbury puts you in touch with some of this heritage; in Langport The Devonshire Arms mixes history and contemporary style; The destinies of kings real mythical and would-be, and of a Lord Protector, have been determined here: Arthur is said to have resided at Glastonbury; Alfred hid in the Isle of Athelney re-gathering his forces while the Danes hunted him; Charles Is last hopes faded at the 1645 Battle of Langport leaving Cromwells Parliamentarians supreme; and in 1685 The Duke of Monmouths rebellion ended at The Battle of Sedgemoor. To get in the historical mood how about staying in an ancient inn like the George and Pilgrims in Glastonbury?

If beaches are what you seek  for sandcastles, walks in the dunes, or the shortest pier in Britain  head for Burnham-on-Sea: Main Beach is the sandiest; the Lighthouse Beach is quieter, great for a romantic stroll; or a mile north of the town the long stretch of sand from Berrow to Brean has dunes and wildlife havens; and at Brean Leisure Park roller-coasters and similar thrills will delight any teenagers in the party  theyll enjoy Hoseasons nearby Holiday Resort Unity too. Seaside and good B&Bs go together perfectly  why not try the Georgian splendour of The Greenwood or the Edwardian Knightsrest in Burnham. Dont by the way be tempted into the mud and soft sand revealed on the beaches of Bridgwater Bay at low tide, which can be dangerous.

Birders have an embarrassment of riches in the Levels, but Meare is a good starting point: Shapwick Moor nearby will give a chance to see red kite, barn owls, or even the hobby; just south of Shapwick is another reserve at Catcott Heath with grassland species to be spotted in the summer (the Bewicks Swans which make for the winter wetland long gone by June). The Tudor Shapwick House a fine place to stay here. For coastal birds Berrow Dunes are a good bet.

Information Britain has over 500 places to stay in Somerset, including nearly 100 cottages. Bridgwater is the nearest the Levels comes to a central point, a good place as a base for touring the area, with a wide variety of accommodation including the 18th century Walnut Tree; Combe House Hotel a little outside the town for a touch of luxury; or in Goathurst on the edge of the Quantocks the Halswell Hotel.