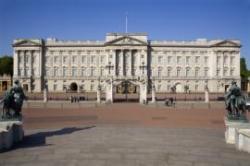 What other destination could we cover this June than London, and specifically the Queens London? Beneath that banner headline we look at specific historic sites relevant to the Queen herself and to the wider monarchy, the sites where various special events are taking place for the Diamond Jubilee celebration weekend, and for those ever in need of retail therapy, some of the most interesting shops in the capital holding the royal warrant.

First things first, given the Diamond Jubilee celebrations come so early in the month lets look at them. The first is pushing the definition of London more than somewhat, though Londoners have for centuries regarded Epsom Downs racecourse as their own territory during the Derby meeting. The Queen is attending the racing on Saturday June 2nd.

Sunday June 3rd sees one of our biggest pieces of pageantry for many a decade, in the form of the royal progress down the River Thames , the Queen joining the flotilla at Cadogan Pier, the journey along the river starting at 14:30, disembarking at the Royal Naval Research Base a little under two hours later to observe the passage of the boats, more than 1000 of them in the pageant, the last of which is expected to pass Tower Bridge at 17:30. This is a day for public transport or sensibly shod feet, as all bridges on the route and all riverside roads will be closed to traffic from 07:00 until after the event has ended. Make for your vantage point early, organisers expect a million onlookers. Monday 4th sees a big concert near Buckingham Palace , though if you havent got a ticket yet you are not going to get in, though from all over the capital the great fireworks display planned to begin sometime after 22:30 is bound to be visible. Theres more chance of being there as it were for the following days great event, the royal carriage progression from Westminster Hall to Buckingham Palace after lunch, the Queen expected to make a balcony appearance later. The procession will take in New Palace Yard and Whitehall , Trafalgar Square, Admiralty Arch and the Mall before heading through the centre gates at Buckingham Palace.

If you are in the capital for the Diamond Jubilee long weekend, some of the royal sites will be off limits during the event. The State Rooms at Buckingham Palace only open on June 30th, and the Queens Gallery is closed on June 4th and 5th. The 11 oclock ceremony of the Changing of the Guard at the palace is also affected, not occurring on June 2nd to 5th inclusive, and also the 9th. There are plenty of other royal sites to take in then and throughout the rest of the month, however, including (and happily theyre free) the eight royal parks , great places to spend some time, let the kids run around, and all being well with the weather soak up some rays. They are atmospheric spots too, and part of the capitals very special ambience, from the smaller St Jamess and Green Parks to the massive (and less central) Richmond Park where it takes little imagination to conjure images of their original use as hunting grounds, thanks to the wild deer roaming here.

As well as Buckingham Palace two other royal residences are to be recommended to get a feel for the history of the monarchy: Hampton Court , the Tudor tour de force that Henry VIII took from Cardinal Wolsey in rather more violent days; and Kensington Palace , home at various times to more recent royalty  Victoria and the late Princess Diana among them. Kew Palace , though a trek from the centre, fits historically between the two, a symbol of the Georgian era of elegant symmetry, and of course while you are there the wonderful Royal Botanic Gardens can be visited, a days outing in itself. To add an earlier dimension to this exploration of royal palaces, and always a great way to spend at least half a day, make your way to the Tower of London , in its time palace as well as prison  and place of execution.

A somewhat more homely and accessible aspect of our royal family is the patronage given to various suppliers  the royal warrant (for those with the Queen, Prince Philip, or Prince Charles as customers for more than five years). Mayfair and St Jamess are the places to make for to enjoy a cluster of such classy emporia: cheesemongers extraordinaire Paxton & Whitfield  we can recommend their Ducketts Caerphilly among many other gustatory gems  in Jermyn Street, the royal grocer Fortnum and Mason in Piccadilly , and Berry Bros. & Rudd so you can buy a bottle or two (or many) to go with the celebrations, their shop in St Jamess Street famed among wine-lovers worldwide.

Or for deeper pockets still the royal jeweller, Garrard & Co in Albemarle Street, a supplier which claims to be the worlds oldest jeweller, or the marvellous Gieves & Hawkes in Savile Row that many would argue is the finest tailor in the world. If you have the necessary licences Holland and Holland in Mayfairs Bruton Street should be able to supply the most demanding shot. So a trip to the capital this June can be themed around the Queens Diamond Jubilee even if your visit comes after the big events are all over. Information Britain can offer a huge range of hotels and other accommodation options for you, along with plenty of information on the capitals history, characters and locations. We hope you enjoy your time in the greatest city on earth.