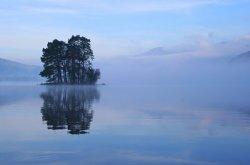 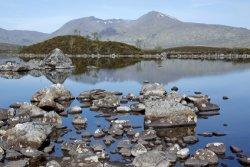 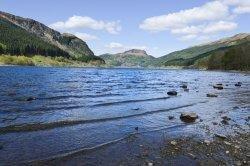 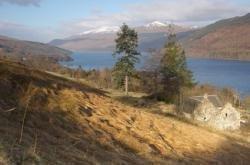 Why the Perthshire Highlands in June? Perthshires somewhat gentler Highlands are more accessible than their more northerly fellows, reachable in a good days driving for most of us, so suitable for a quick break. Likewise this is a relatively small area, with its attractions concentrated.

Perthshires Highlands, very roughly, fall within a rectangle whose corners are the western tips of Lochs Tay and Rannoch, and the towns of Blair Athol and Dunkeld. The other significant settlements  none a metropolis - are Pitlochry, Aberfeldy, Kenmore and Kinloch Rannoch.

Among a multitude of activities at this time of year a few stand out. The first is the simple spiritual joy of motoring through fabulous countryside: exploring Tay Forest Park; dawdling along the shores of Loch Tay, Loch Rannoch and Loch Tummel; following the little roads in Glen Lyon.

The second is less spiritual more spirit - the district has three fine distilleries: the tiny Edradour and larger Blair Athol in Pitlochry, both offering paid tours; and Aberfeldys eponymous distillery combined with the exhibition centre of Dewars World of Whisky. Think of it as culture, which it is, though its pleasure and gastronomy too.

Third excuse for a trip is the golf: Pitlochry Golf Week takes place June 11  17, but perhaps more enticing is the Perthshire Highlands Golf Ticket giving the use of 12 9-hole courses for the bargain price of £40 for three days or £65 for five. There are of course plenty of other events on  several organised shoots welcoming visitors for example. And the mountains are an ever present, Ben Lawers at 3984 feet the most impressive with an awesome panorama. Within the district theres also a wealth of places to visit: the Scottish Crannog Centre at Kenmore, Blair Athol Castle, just one of a list of impressive fortresses that also includes Castle Menzies; and spots like Wades Bridge and the Falls of Acharn.

As you would expect with an area that has attracted its fair share of visitors since at least the 19th century there are many accommodation options in the Perthshire Highlands. Why not make yourself a home-from-home by renting a cottage? Mains of Taymouth in Kenmore have a selection; the Kenmore Club has modern cottage-style units; Aberfeldy Cottages are another option. At Blair Athol Oak Apple Lodge offers modern comforts in wooded grounds; and there are more traditional individual dwellings like Rillbank Cottage near Dunkeld.

For some of us a traditional inn is the place to lay our heads after some robust country cooking and a little something to wash it down. The rather grand Georgian building the Atholl Arms in Dunkeld qualifies; so too the homelier and characterful Loch Tummel Inn near Pitlochry; the Weem Hotel in Aberfeldy was once a coaching inn; and the Kenmore Hotel at the mouth of the River Tay is Scotlands oldest inn. If you are after some top-end luxury the area can provide that too: the Hilton Dunkeld is in a large estate with the Tay running through it for the fishing and a health club with pool and fitness centre. The Loch Rannoch Hotel likewise is in 250 acres of grounds and has its own marina and indoor leisure centre. The Pine Trees Hotel in Pitlochry is a traditional country house place for a stroll-in-the-wooded-gardens and relax by the log-fire sort of stay.

The area also has a host of smaller establishments and bed and breakfast places great for those hopping from town to town, or even hiking it, just scroll through our listings.

So pack the boots, the golf-glove and the maps, and bring along a designated driver if you plan to explore the areas possibilities. Or just some comfy clothes and a good book if you aim to do nothing much but do it in style. Perthshires Highlands wont disappoint either way.