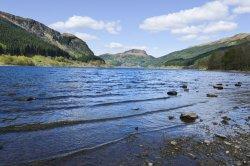 Comrie
Did you know that what are thought of as the worlds first seismologists hailed from Comrie? In the latter part of the 18th century and throughout the 19th village worthies kept records of the frequent tremors experienced there  Comrie sits very close to the Highland Boundary Fault. What is more they established ways of measuring the intensity of the shocks scientifically  they invented and developed the seismometer, and Postmaster Peter Macfarlane devised a scale to record those findings. The listed Earthquake House, a tiny structure built in 1874 for such work, still stands on a hill above the village.
Fortingall
Did you know that the oldest living thing in Europe is the Fortingall Yew - at least 2,000 years old and by some estimates perhaps 5000 or at the wildest end of the scale 9000 years old? As the heartwood has decayed, leaving two boughs rather than a single trunk, even were the protected tree cut down we could not assess its age by counting the growth rings. Local legend has it that Pontius Pilate was born beneath this tree, the son of a Roman emissary to the Picts and a Pictish girl.
Did you know that Pontius Pilate was born in Fortingall.
Pitlochry
Did you know that Pitlochry is the furthest Scottish town from the sea? Nowhere in Scotland is actually more than 62 miles from the shiny briny.
Did you know that Edradour Distillery in Pitlochry is the smallest in mainland Scotland? It produces just 12 casks a week. For those who are interested the dram has a lovely citrus note to it. Mmmmm.