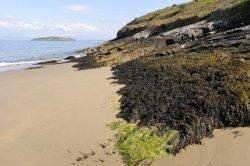 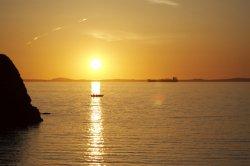 Cardigan Bay as a destination would be a tester for a professional explorer. Not in terms of terrain, though the Cambrian Mountains backing much of the area have their moments, but in scale. The bay is vast, stretching from Bardsey Island at the tip of the Lleyn Peninsula to Strumble Head near Fishguard. Thats roughly 150 miles through three counties: Gwynedd, Ceredigion, and Pembrokeshire. For most of us Cardigan Bay even fits the bill of a foreign holiday, Ceredigion being one of the more culturally Welsh parts of Wales. And dont think you need go to Florida to spot dolphins, Bae Ceredigion, as we should say while we are promoting Welshness, has plenty of bottlenose dolphins and harbour porpoises too, with organised boat-trips to the best spots to find them.

With a bit of luck you may even spot those lovely cetaceans from one of the great beaches dotting the shoreline. There are too many to mention them all, but Newport Sands, National Trust-owned Mwnt Beach, and Cwmtydu Beach near New Quay are three of the standouts.

Beaches can mean many different activities  surfing, angling, birding, and sailing to name but four  though for the kids they mean the equally fascinating digging-up and paddling, essential elements of the traditional seaside holiday. The bay has some proper seaside resorts for just such family breaks: Abersoch, Pwllheli, Criccieth, the brilliant Barmouth, Tywyn and Aberporth among a host of others.

A more strenuous way to enjoy the spectacular coast is to walk it  the Ceredigion Coast Path is a gem, with thoughtful touches like a scheme to forward your bags stop-to-stop by selected cab companies. Moving away from the coast there is the Ystwyth Trail from Aberystwyth to Tregaron, much of it along former railway routes.

This being Wales there are some fine castles to visit, always a winner with the kids and a sneaky way of getting some history into them. Cardigan Castle has a medieval day on August 6; Aberystwyths example may be ruined but is very evocative; more remains of Criccieths fortress, one of the most spectacularly set in the country. In the land of song too you may want to seek out some of the musical events this month like New Quays Music Festival from 5 to 7 August; or the very eclectic mix on offer at Cardigan Quays Festival every weekend. As regards accommodation in the area there is similar variety on offer. For the full coastal experience there is the Cliff Hotel and Spa near Cardigan itself, the Webley Waterfront Inn at Poppit Sands; and Caerwylan Hotel bang on Criccieths East Shore.

Country House Hotels aplenty are to be found here too: Castell Malgwyn Hotel in Llechryd, the Edwardian splendour of the Penrallt Hotel in Aberporth, Bron Eifion Country House Hotel near Criccieth, Porth Tocyn in Abersoch... For a touch of the village or coaching inn how about The Lion Inn at Y Maes? Or the Black Lion Hotel in Tallybont. Or a proper seaside guest-house like Llysfor in Abersoch?

A cottage makes a great base for exploration and a private place to come home to: The Granary at Garden Farm in Tufton near Fishguard has real character, but then so do places like Cefn Coch Isaf in an unpronounceable village near Porthmadog.

Some of us have few finer childhood memories than seaside camping and caravanning holidays: on and near the shoreline here you are spoiled for choice, just search by location on this site.

We seriously doubt that you will run out of things to do on, in and around Cardigan Bay even if you go for two weeks, but if you want change dont forget the mountains (as if you could), the gold and silver mines, the narrow-gauge trains, lakes, rivers and streams, and the innumerable wildlife reserves. And dont forget to seek out a real Welsh breakfast wherever you go, they dont build prop forwards on muesli.