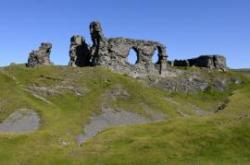 As May is not full summer but not quite spring it makes good sense to select a destination that can be enjoyed beneath both sunny and cloudy skies. So our suggestion for this months destination of the month is Denbighshire in North Wales, a small county with a huge variety of attractions indoors and out.

If you are going with kids and the sun shines, you can make your way to Rhyl and Prestatyn to enjoy the sands  no shortage of little seafront shops to buy a bucket and spade for the eternally enjoyable (and happily cheap!) pastime of digging up. Rhyl has recently seen major redevelopment work, but traditional delights like the miniature railway , marine lake and aquarium still vie with more modern attractions. Prestatyns beach is famous, but there is more to the town than its pleasant sands  catch a bit of culture by visiting the remains of the Roman Baths , or enjoy the recently boosted shopping facilities.

This is the county too for castles and cathedrals  well, one cathedral and one folly that was intended to become such a structure. Rhuddlan has the most spectacular fortress in the county, and one of the best in all Wales, the second of Edward Is colonising belt of castles begun in 1277. Badly slighted by Parliamentary forces in the Civil War its 9 thick walls and remaining towers nevertheless impress visitors to this day.

For a touch of the mythical along with the real you can head to Ruthin , another castle town, though the single stone in the town square  the Maen Huail  with its Arthurian connection may be of equal interest: King Arthur is supposed to have beheaded a rival here who had injured the king in a duel about a lady, then broke his vow not to mention the wound. Among its buildings there is the medieval courthouse and prison, no longer of course used for thieves and scoundrels as it houses a bank. The old gibbet can still be seen.

If you would like to see evidence of a real royal temper, head for Corwen , where a groove in the church lintel (it is claimed) results from Owain Glyndwr throwing a dagger at it in a fit of pique. The countryside around Corwen is very fine, but then so is the rest of Denbighshire  from its northern coastal plain to the Vale of Clwyd in its heart and the forested hills and looming mountains in the southern part.

Perhaps the finest castle you will find in the county, in terms of preservation, is that at Bodelwyddan , not far from Rhyl, which has the advantage of being of more recent vintage, dating from the mid-15th century. If you are of an artistic bent this is a destination you will want to make for  it has many pictures on loan from the National Portrait Gallery, and houses other objects from the Royal Academy of Arts.

Denbigh has the ruins of another of Edward Is castles, with an odd three-towered gateway, near which you will find a row of ruined arches, a remnant of the Earl of Leicesters attempt in the reign of Elizabeth I to build a cathedral in the town. For a real cathedral, and one with very ancient roots  the bishopric founded in the 6th century  make your way to the city of St Asaph . And therein lies a tale. A cathedral city since Saxon times, St Asaph is still toasting its award of civic city status made this year as part of the Queens Diamond Jubilee celebrations. This is not a major metropolis, however, with a population of about 3500; but it is pretty, with a fine old bridge over the Elwy, an equally fine river, and its hill-top cathedral. Inside the building theres an original copy of the first Welsh translation of the bible, made in 1588 by Bishop Morgan. This bible is of huge cultural importance to Wales and the preservation of the Welsh language which you will hear spoken in many of the markets like Denbighs.

Another Denbighshire town of great significance to the culture of Wales is Llangollen , where every July an international Eisteddfod takes place. You wont be able to catch that in May of course, but its other attractions should draw you to the place anyway: there is a fine preserved steam (and some diesel) railway that runs from Llangollen; the medieval bridge is one of the Seven Wonders of Wales (or alternatively one of the three beauties of Wales), not to be missed, likewise Valle Crucis Abbey , the long disused Cistercian foundation here.

The county is easily reached by road, with the A55 striking across the North Wales coast to Rhyl and Prestatyn, the A525 running through the Vale of Clwyd to link with many of the other main towns, or the A5 wending westwards from Telford and the end of the M54 to reach Llangollen and the southern parts of the district. Information Britain has a wealth of accommodation options in Denbighshire, in the places named above and several others with their own sights and pleasures.