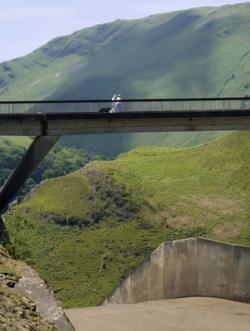 Nobody is suggesting packing the beach gear for two weeks of guaranteed sun in the South Wales Valleys. If, however, you fancy a quick trip or a few days off to explore some fascinating and truly varied attractions, take in the countryside, and cater to the inner man (and woman), then the South Wales Valleys are a rewarding choice.

In rough non-geographer terms the valleys are delineated by the A465 Heads of the Valleys road at their northern end, and the M4 south. Look at a map between those and youll notice lots of up and down routes and very few across. As regards attractions, naturally there are many, but the absolute must sees are surely Caerphilly Castle, the World Heritage Site and Big Pit (the National Coal Museum) at Blaenavon, and Cyfartha Park in Merthyr Tydfil.

Caerphilly Castle is second in size only to Windsor, its curtain wall 300m long, and with a tower leaning further from true than Pisas! Its also a wonderfully dramatic place in fine green surroundings, and if you can time your trip for The Big Cheese event over 29-31 July you will see some spectacular entertainment. The New House Country Hotel in nearby Thornhill is just south of Caerphilly, or Premier Inns have two of their ever reliable hotels around the town itself.

The whole area was built literally and metaphorically on coal, which in turn produced steel. That heritage is explained at Blaenavon, where you can explore the old ironworks, or more daringly its Big Pit, going underground with former miners to get a real feel for their world. A few miles north you will find The Old Rectory Hotel in Llangattock. The Rhondda Heritage Park has a similar aim, and even has The Heritage Park Hotel on site, or alternatively Llechwen Hall Hotel only a short drive away.

Cyfartha Park in Merthyr Tydfil is the other side of the industrial equation, the castellated Regency mansion at the heart of a vast park the fruits of an ironmasters empire-building skills. This area was forged in the industrial age, but plenty of prime countryside was left undisturbed, and intriguingly much land once devoted to production has reverted to greener use. St Gwynno Forest above the Rhondda is stunning, and its church a Doctor Who location into the bargain. Dare Valley Country Park is 500 acres of greenery for walkers and birders. Sirhowy Valley Country Park is twice that size, with riverside rambles and hiking through wooded slopes. If you fancy something a bit more dashing try Parc Bryn Bach near Tredegar for the mountain biking.

We always make sure there is plenty for the gourmet (and lets face it gourmand) in our destinations of the month, and the Valleys are no exception. If you enjoy a glass of something warming and civilised make your way to Penderyn Distillery near Aberdare, a tiny craft distillery making Welsh whisky where you can learn how it is done, and incidentally try a drop of the good stuff. Or at the end of the Ely Valley just off junction 34 of the M4 give Llanerch Vineyard a few moments of your attention. The Rhymney House Hotel near Tredegar is convenient for the distillery, The Countryman Inn near Llantrisant (with the bonus of fishing) a short drive to the winery.

There are of course many many more attractions dotted all over this fascinating region, though it could be that its people are the biggest attraction of all. Make a base in one of the many Cardiff Hotels we list, or perhaps opt for the splendour of the Brecons or Monmouthshire to vary things.

Review from Glyn Radcliffe-Brine, 26th Jul 2011:
Not an enquiry, just a comment: I've just happened upon your "South Wales Valleys" page. The hook "Nobody is suggesting packing the beach gear for two weeks of guaranteed sun in the South Wales Valleys. If, however..." is brilliant. When I followed that opening line to the page I found a beautifully written and well informed article that was a joy to read just for the sake of reading. Please pass on my sincere thanks to the writer for giving me a few moments of pure pleasure Best wishes, Glyn Radcliffe-Brine PS I can't remember the last time I heard or saw the word "literally" used correctly. Well done!