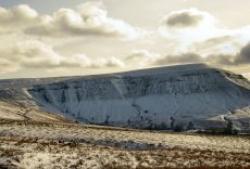 Abergavenny
Did you know that Rudolf Hess was kept in the towns asylum after flying to Scotland to try to negotiate a peace deal? During his later incarceration in Spandau Prison the one-time Deputy Fuhrer, only allowed 30 or 60 minutes of visiting time a month, must have looked back with longing at his weekly walks in the Welsh countryside while at Abergavenny.
Caerphilly
Did you know that the South East Tower of Caerphilly Castle leans at a greater angle than the slightly more famous Leaning Tower of Pisa? The medieval castle, second in size in Britain only to Windsor, was slighted (which always sounds like some mild insult) by Cromwells forces in 1648, leading to the South East Tower splitting in two. Now the 20m of the structure that remains leans three metres off true.
Caerwent
Did you know that Caerwent in Gwent is claimed as the place where St Patrick was born and from which he was kidnapped by Irish raiders? Patrick is supposed to have been born at the very end of the Roman era in Britain, when such raids would have been relatively free of risk for the Irish. His birthplace, however, is said to have been Banna Venta Berniae, and Caerwent in Roman times was called Venta Silurum.
Cardiff
Did you know that Spillers in Cardiff, which opened in 1894, is the oldest record shop in the world? In the music business longer than Cliff Richard it started out selling wax phonograph-cylinders and the equipment needed to play them, along with that technological leap forward shellac discs. The first shop was in The Queens Arcade; it later moved to The Hayes; and recently shifted again to The Morgan Arcade.
Chepstow
Did you know that though more closely identified with Edinburgh J.K. Rowling attended Wyedean School and College in Chepstow? Several elements of the books are said to have their origins in the town: a friend in the sixth form owned a turquoise Ford Anglia; Severus Snape may have been partly based on her long-haired chemistry teacher John Nettleship; and Rowlings unhappiness there  though she was eventually head girl  seemingly inspired Hermiones early isolation at Hogwarts.
Llandovery
Did you know that Llandovery owes its laudable profusion of pubs to Richard III? That much maligned king granted it a charter in 1485 allowing for the holding of a market, one aspect of which was a monopoly on taverns in the district. That privilege may have long disappeared, but some of the ancient inns havent; and may they never do so.
Monmouth
Did you know that Monmouth has the only Norman fortified bridge remaining in Britain? Monnow Bridge across the river of the same name was finished in 1272, though the fortified tower that makes this survival unique was added in the following century.
Swansea
Did you know that the Gower Peninsula near Swansea was Britains first Area of Outstanding Natural Beauty? It was designated such in 1956, the outrider for now more than 40 such places (five within Wales). With a big city nearby and facing growing tourism the beautiful Gower was an obvious choice for such protection. It boasts a dozen orchid species, varied birdlife, and rare invertebrates such as the Dotted Bee Fly and The Bloody Nosed Beetle.