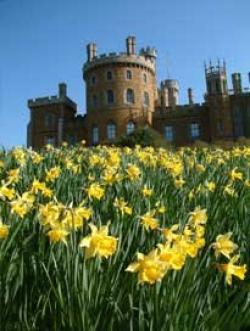 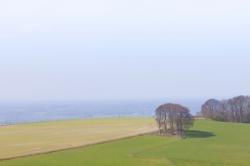 As the name of the place means beautiful view you should have an inkling of whats in store if you visit the Vale of Belvoir. But first youll need to know what constitutes the Vale, harder to define than it sounds: its roughly the diamond with Melton Mowbray and Bingham at its southerly and northerly points, both part of the area; and Grantham and Cotgrave at the east and west tips, but not within it. And its an area packed with pretty little English villages: Scalford, Eastwell, Denton, Plungar, Scarrington, Langar, Tithby, Redmile, Croxton Kerrial... Not lacking for counties either, with its heel in Notts, foot in Leicestershire, and a toe in Lincolnshire.

Why go here in March? You havent been listening to Jonathan Agnew, a one-commentator advocate for his base on Test Match Special. First and foremost its an area of natural beauty arguably at its best as spring arrives. This is a place to breathe some fresh air among green fields and rolling countryside  try the towpath of the defunct Grantham Canal, or follow your nose down the little lanes that criss-cross the district.

The Vale is also something of a British foodie pilgrimage destination: this is the home of Stilton Cheese, produced at Colston Bassett and Cropwell Bishop among other locations; and of the Melton Mowbray Pork Pie, that contradiction in terms a substantial delicacy  Dickinson and Morris have a pie shop on Nottingham Street in the town that all bar perhaps vegetarians should visit if within 25 miles  for some of us one of their pies and some Melton Hunt Cake constitutes a balanced meal, maybe washed down with a local brew  Parrish is probably the nearest, but Leicestershire is a county with a rich beer tradition recently enhanced by various micro-breweries.

Though summer visiting doesnt begin for a while, it is nevertheless worth a detour to catch a glimpse of Belvoir Castle, still lived in by the Duke and Duchess of Rutland. They own The Manners Arms in Knipton not more than a stroll from their home, one of the top places to stay in the area. Or if you fancy a touch of the grand house yourself, Stapleford Park just east of Melton, or Scalford Hall on its northern side are fine options. For the coaching inn experience  of which eating Stilton has to be part  there is the Red House in Nether Broughton; or go for the country pub  so much better as an accommodation choice now theyre smoke-free  at spots like The Crown in Sproxton on the eastern edge of the Vale, or The Crown and Plough in Long Clawson.

Rather less spectacular than Belvoir, but worth a visit for another reason, is Aslockton Castle, now just earthworks. This is the village where Thomas Cranmer was born, one of the great figures of the Tudor age. Venture just beyond the Vale to Woolsthorpe Manor near Colsterworth and see the home of one of the great figures of any age  Isaac Newton. Not sure where Margaret Thatcher and Grantham fit in that pantheon.

If the attractions of gentle open countryside begin to pall for you, then Belvoir is close to Nottingham and Leicester. Or you could go uber-rural and drive a few miles east to Rutland  Rutland Water a major visitor destination in its own right with nature reserves and Barnsdale on its lengthy shores. But we think that the simple pleasure of lovely surroundings and cosy accommodation will be enough to content you for a break to recharge the batteries. With lots of Stilton and pork pies for fuel.