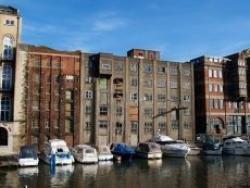 Bristol is a wonderful mix of the ancient and the modern, the indoor and the outdoor, making it a brilliant place for a break when plans can be made up on the go according to weather and inclination.

If the weather makes indoor entertainment preferable Bristol has loads to offer: the Industrial Museum is not a bad start to begin exploration of the citys world famous engineering heritage (and Isambard Kingdom Brunel links), with outdoor sites like SS Great Britain and the Clifton Suspension Bridge to follow when the elements allow. Or maybe a more hands on experience will keep the kids busy: try @ Bristol with its IMAX screen and stuff where buttons are pushed and discoveries made. And at the other end of the historical range there are the Roman Villa at Kings Weston, and Berkeley Castle where the experiences of Edward II and Elizabeth I couldnt have been more different  the latter enjoying a game of bowls, the former having a game made of his bowels.

When the great outdoors beckons Bristol has green spaces like those round Ashton Court or Oldbury Court on the doorstep; or a bit further out of the city Cheddar Gorge, Wookey Hole, Glastonbury where legend says you can walk in King Arthurs footsteps, and those of Joseph of Arimathea ... If you feel the need for exercise the old railway line between Bristol and Bath is now a cycle path winding through lovely country beside the River Avon, and for the most experienced practitioners the Bristol Channel offers some surfing and windsurfing opportunities.

If that leaves you out of breath recover with a more tranquil visit, say to the City Museum and Art Gallery, or the lovely old Cathedral. As with all of our historical cities in the end the simplest pleasure can be just a stroll around with eyes wide open to take in the architecture: in Bristols case that encompasses medieval, Georgian and Victorian in particular. As a once great port there is of course the attraction of water, and Bristol has of late made the most of that magical element  from ferry boat and pleasure boat rides on it, to buzzing places developed along it.

When exercise and sea air has built up an appetite, all to the good. Contrary to what the national press believes, there are restaurants outside London, and some of the best in the country will be found in Bristol. And best doesnt just mean fine (and expensive) cuisine; it also means great ethnic places reflecting Bristols trading past and cosmopolitan present: Lebanese; Asian; Caribbean. Or try the booming Bristol bar and bistro scene  try saying that after a glass of the fine wine still imported via Bristol; or a nice local beer, or even a drop of Somerset cider.

A city with two universities and a population rapidly approaching 500,000 is not going to be short of nightlife either: the docklands has plenty of clubs and bars; or for a more traditional night out the theatre provision is impressive, with three main spots  The Hippodrome, The Tobacco Factory, and Bristol Old Vic: look at the CV of any top British (and many an American) actor and youll find they trained at the Old Vic, or performed there: Brian Blessed; Daniel Day-Lewis; Jane Lapotaire; Ian Lavender; Helen Baxendale; Pete Postlethwaite; Sir Patrick Stewart... book a seat and see the stars of tomorrow and today  the same goes for the music scene, where with a bit of luck you could see the next Portishead or Massive Attack - if you still have the energy.