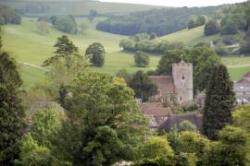 The High Weald of Kent

This March, instead of rushing through the Garden of England to stay on some breeze-block terrace of France, why not take a break in some of the loveliest countryside in Englands South East? The High Weald stretches across Sussex and Kent, the Kent portion smaller in area than that in Sussex, though every bit as stunning. As spring begins the woodland here will be bearded with bluebells, just one of the reasons it was designated an Area of Outstanding Natural Beauty more than 60 years ago.
Lets start with a little delineation and explanation. Kents High Weald is, very roughly, the area of sandstone ridge and hill country that runs from Tunbridge Wells in the west to Tenterden in the east, the villages of Goudhurst , Sissinghurst and Biddenden along its northern edge, and Hawkhurst, Rolvenden and Benenden towards its southerly side. In ancient times it was all forested, the very word Weald meaning woodland in the Saxon tongue.
The geology and landscape here made farming marginal, so even when much of the forest had been cleared a patchwork of relatively small farms remained and remains, linked by lanes that have sunk over the centuries below the surrounding land of irregular-shaped fields. As travel was easiest over the ridges or along valley bottoms, that is where the villages still lie, those atop the hills providing the walker and cyclist with charming views of their steeples and cottages.
While much of the forest has gone, about a quarter of the land is still covered in trees, the bulk of that ancient woodland. Bedgebury Forest between Cranbrook and Kilndown offers plenty of scope for a good hike through the trees, or just a stroll, and at its north-western edge is one of the areas principal visitor attractions, the National Pinetum, a collection of pine trees unparalleled in the world. One of our featured venues, Three Chimneys Farm , is just a couple of minutes drive from the Pinetum, its five cottages and oast-house roofs a picture of the Weald in miniature.
Above the little villages of Goddards Green and East End is another significant woodland area, Hemsted Forest , which has a large country park that again is prime territory for the cyclist and the walker, and also here the rider .
The villages here have retained their individual characters (and plenty of their pubs !). Take Biddenden as an instance with its village green with its memento of the conjoined twins who bequeathed land to pay for an annual dole still kept. The village has some fine weavers cottages, a medieval cloth hall, and remnants of old marble pavement. Textiles have been replaced as an employer by cider-making and even vineyards dotted around the district.
Sissinghurst , five miles west of Biddenden along the A262, is equally pretty, but visitors here are likely to be making for its world-famous gardens , created by Vita Sackville-West and her husband Harold Nicolson. They bought the decayed castle in 1930, and restored parts of said Tudor pile that forms a backdrop to the magnificent plantings.
While touring the area keep an eye out for local crafts, and consider a purchase or two to help them survive and thrive. If we count the hop growing that has been a part of the landscape for several centuries, that purchase could be particularly painless  a pint or two of the many wonderful ales of Kent , this county having a case for brewing the best range of beers in Britain. Or if Vitas gardens have taken your fancy, buy a trug to help you in yours  the sweet chestnut trees locally are said to make perfect materials for those practicing this handicraft. And as could be expected of such a wooded place, the other craft for which the High Weald is known is also linked to the wealth of trees: charcoal making  buy a bag or two for the upcoming BBQ season (we can hope) and support a trade that supports the landscape.
If the younger members of the party need to be placated Tenterden at the eastern end of the High Weald has the preserved Kent and East Sussex Railway  old trains generally keep the pre-teens happy for an hour or so. And as the famous Chapel Down vineyard is not too far away, it would be almost rude not to fit a quick one - sorry cultural exploration of viticulture - in along with the railway journey. The teens too will be happy here, as the town has some interesting shopping spots to seek out, and the older generation will enjoy the antiquing (and the very fine selection of old pubs).
The High Weald is a rural spot, with a very low population density compared to most of the South East, but if you cannot go without a larger town for more than a few days Royal Tunbridge Wells is the largest settlement here  and a very lovely one too. If the ales and wines are starting to take their toll you can still take the waters that have been enjoyed, if thats the word, since Stuart times, the parish church of St Charles the Martyr an elegant reminder of that lineage. The equally splendid Pantiles with its Italianate Pillars and wrought-iron balconies is an architectural must, but a shopping one too.
Within very easy reach of London, and not difficult for the rest of us given the proximity of the M25, the M20, and the M23  though all are considerate enough to run outside Kents High Weald  this is an area that deserves to be much better known, worth a weeks or weekends stay, or just an overnight if you are heading for the Channel Ports. Information Britain as ever can direct you towards an excellent selection of places to stay in the area, and lots of other facilities to enjoy while you are there.