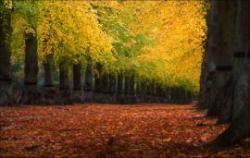 November is a time to make a break for (and of) it before the inevitable family duties and - we can but hope - social whirl of Christmas take over. For many the opening days will be their half-term, for others the remainder of the month is a child- and young-family free zone to enjoy in peace. We hope both sets will consider what late autumnal Nottinghamshire has to offer  leaf-peeping in its woodlands one simple pleasure of the season for young and... maturer alike. Perhaps it would be more accurate to write about what the two Nottinghamshires have to offer, for there is a world of difference between the countryside here and the city at its core, though there is no reason of course why a break should not combine both elements.

The two men who are arguably the countys most famous sons unite that countryside and Nottingham itself, those figures being Robin Hood and DH Lawrence. There are plenty of activities you can join that celebrate the life (or myth - spoilsport) of Robin Hood , with key sites Nottingham Castle and Sherwood Forest whose remaining territory spreads north of Arnold past the eastern side of Mansfield and on to the edge of Worksop. You can visit the famous Major Oak , and get a fuller picture by calling on the Sherwood Forest Information Centre near Ollerton . If you have the fitness and inclination, by the way, theres a series of runs and a duathlon taking their inspiration and titles from the legend, from 5k upwards on November 11th in Mansfield .

DH Lawrence , one of the key novelists of the 20th century, was born in Eastwood to the west of Nottingham and studied and worked for a time in the city itself. His hometown understandably has several sites of interest to the enthusiast and simply curious alike, including a museum at the house in which he was born, and a heritage centre dedicated to him. You can follow a Lawrence trail around the town taking in four of his homes and other sites of significance in his early life. (If you want to immerse yourself in the Nottinghamshire of the early 20th century, however, you cant beat a trip to the National Trusts Mr Straws House in Worksop).

When we think of Nottinghamshire it is probably the county town and some of the other urban centres like Worksop that spring to mind first, but there is a great stretch of open rural country on the eastern side of the county that is little explored by tourists  and all the more inviting for that reason. Some of the pretty little villages and tiny towns that make up the Vale of Belvoir fall within the Notts boundaries: Elton , Granby and Sutton at its heart, Langar, Colston Bassett and Bingham along its edge. This is rural England at its gentlest, the sort of place to lose yourself in back-lanes and find yourself in pubs .

A short drive northwards brings you to the country between Newark and Southwell , both towns with architectural and historical sites to recommend them to visitors: the Norman grandeur of Southwell Minster and its chapter house are not to be missed; it was in this town that Charles I surrendered to the Scottish Army; and where the Bramley apple originated  so eat a pie to celebrate the fact. Newarks central square is splendid  part of its attraction the various inns  and an unlikely pair, Byron and Gladstone , began their (very separate) careers here.

For many, however, it seems odd saying Southwell without the words racing from preceding it. Over November there are seven days of horse-racing, one National Hunt on the turf, the rest flat meets on the all-weather track (so little or no danger of it being called off). There is something stirring about being at a race day even for those of us not au fait with bloodlines and bookmaking, and a good rural event with hands and hearts warmed by hot tea and the spirits lifted by the thought that your £1 accumulator could make you rich-ish pays off in memories alone.

North again brings you to the Dukeries, another fascinating aspect of the county for those interested in our history  here four dukes made their very grand homes. One of these now in part houses a hotel ; Welbeck Abbey has many parts open to the public  and a renowned foodie side  and the best-known, Clumber Park , is another National Trust Property that you must make for  wonderful walks to delight you as well as the magnificent building. If you have your fill of the countryside, or just want to fill your evenings and nights as well as days, then Nottingham has a multitude of options for you. Opera North is performing, likewise the Hallé Orchestra; there are musicals, plays and comedy events aplenty  plus a fireworks spectacular or two; and in the Lace Market and adjacent Hockley youll find the pulsating nightlife for which the city has become renowned (there are about 40,000 thirsty students in the city to support that sector). Or if you fancy something a little more rooted make for the City of Caves , or the inn similarly built into its hillside that claims to be the oldest in the land  old enough for Robin and Little John to have enjoyed a flagon or two there - if they existed.

With the M1 running right by the city this is somewhere that is easy to access. And Information Britain can make it easy to find the right place to stay too  country cottages, inns, B&Bs tucked away in the quiet countryside, country house hotels and spanking new places all covered on our accommodation pages for the county, many of them bookable online.