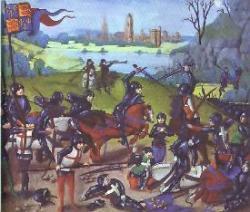 Great Plague of London at its Height

The insanitary and crowded conditions in London in the mid-17th century were ideal for the spread of disease, the worst of which  bubonic plague - hit the capital in 1665  though the arrival of the plague was actually first noted in April 1664 in St Giles.
It is thought that in all more than 100,000 Londoners died during the outbreak, about a fifth of the total population at that time, the death-toll stretching from April 1664 to the winter of 1665. Attempts to keep the population from fleeing the capital and thus spreading the disease had limited success, the wealthy quitting in large numbers in the spring and early summer of 1665. Charles II and his court showed scant regard for his wider kingdom by departing for Salisbury in July 1665.
Daniel Defoe and Samuel Pepys give graphic descriptions of the city nearly deserted, people unwilling to venture out of doors other than to obtain the supplies needed to survive  the sources of these supplies changing from the traditional markets to spots further afield that the market gardeners, butchers and so on felt were safer  Bunhill Fields, Islington , Spitalfields, and Southwark among them. Tradesmen took pathetic precautions against the contagion, for example coins being dipped in vinegar. The horror of the pestilence was seen in many ways - the horrid buboes that bulged on victims; sudden deaths in the streets from those unaware they had it; the carts piled high with the dead.
Many thousands of dogs and cats were slaughtered as it was suspected they harboured the disease, but the rats who were the main carrier of the fleas linked with its spread multiplied in the hot weather that summer, with few rat-catchers to reduce their numbers.
September 1665 was the worst month for fatalities from the plague: in the week ending the 19th more than 10,000 are said to have died from it; the next week the numbers reduced slightly to 7165 (out of a total of 8297  it is intriguing by the way that the cause of death for 121 others was given as teeth).
Charles and his court only returned in February 1666. Later that year the Great Fire affected as great a change on the architecture of London as the plague had done on its populace.