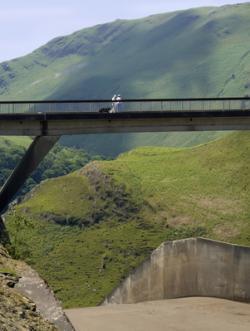 The Cambrian Mountains is the name given to a series of mountain ranges in and area of Mid Wales. They stretch from, and include, the South Wales mountains of the Brecon Beacons , north Carmarthenshire and Ceredigion, to Snowdonia in North Wales. The area's bid to become a National Park failed in 1973 mainly, it seems, due to the opposition of local farmers.

The Cambrian Mountains is a sparsely populated wilderness and it is sometimes known affectionately as the Desert of Wales, although this is definitely not due to any lack of rainfall! Others consider it to be Wales' best kept secret, with the Brecon Beacons National park to the south, and the popular Snowdonia National Park to the north attracting the crowds. The land is mainly given over to agriculture, mostly sheep farming, although large pockets of managed woodland are dotted around.

The highest point of the range is at Pumlumon which rises to 2,467 feet. The area includes the source of the River Severn and River Wye and is the watershed of Wales. Several lakes and reservoirs are within the region. These include the large Elan Valley reservoirs and the Llyn Brianne reservoir, which hold water for the English West Midlands , and South Wales respectively. The Clywedog reservoir and Nant y Moch reservoir are also sited within the Cambrian Mountains.

The area has two small spa towns, Llandrindod Wells and Builth Wells . The Romans knew about Llandrindod Wells' saline and sulphur rich springs and in the 19th century the town was once again a very popular spa resort. It is still possible to visit the Victorian Rock Park pump room, first built around 1867 and recently restored. The art nouveau Automobile Palace in Temple Street hosts the National Cycle Collection .

Builth Wells is home to the huge Royal Welsh Show held annually at the showgrounds in nearby Llanelwedd. The showgrounds also host a bike show, in May, and a Dog show in August.

Although not a spa town, Lampeter has the claim to fame of being home to Wales' oldest university. The bustling market town is well known for its annual food festival and is home to a delightful collection of specialist shops, many with an emphasis on organic fresh food.

The area is heaven for walkers, pony trekkers and mountain bikers and is criss-crossed by paths, trails and bridleways. You can go for miles without seeing another person, although you are unlikely to get very far without seeing sheep!