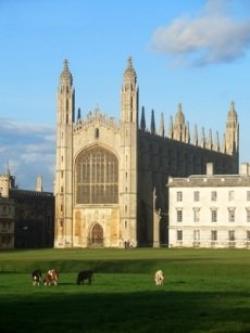 Cambridge
Did you know that you are not allowed to play tennis on the streets of Cambridge?
Did you know Did you know that Oliver Cromwell is buried in an unmarked grave close to the doors of the Sidney Sussex College Chapel? He was originally buried in Westminster Abbey , but in 1661 Charles II had his body removed to be hanged, drawn and quartered and finally beheaded at Tyburn , his skull displayed on a spike at the Abbey for nearly a quarter of a century. What is thought to be his skull was eventually buried at his old college Sidney Sussex in March 1960.
Ely
Did you know that the town (or Island) is named after the Eels found in the surrounding waters
Did you know that the Medieval annual St Audreys Fair was famous for selling cheap trinkets and baubles, and hence the derivation of the word tawdry from St Audrey.
Did you know that the Octagon within Ely Cathedral is the only Gothic Dome in the world.
Holywell
Did you know that the Old Ferryboat Inn at Holywell near St Ives has been serving alcohol since at least 560AD, making it (though as with so many such claims others dispute the honour) the oldest inn still in use in Britain? It hosts a pretty ancient ghost too, the spirit of a girl Juliet whose death in 1050 is commemorated by a stone slab in the bar floor  the pub expanded over the site of her grave it seems.
Peterborough
Did you know that Holme Fen, 6 miles south of Peterborough, is the lowest point in Britian at 9 feet below sea level
Did you know that Catherine of Aragon is buried in what is now Peterborough Cathedral ? Her last year of life  fasting and confining herself to one room - had been spent in Kimbolton Castle in the same county. In keeping with the resolution of the Kings great matter her funeral dignities in the then Abbey were those of a dowager Princess of Wales (as widow of Prince Arthur), not Henry s Queen.
St Neots
Did you know that Grafham Water near St Neots is the third largest reservoir in England? It has a shoreline that stretches for about 10 miles. The reservoir was made by building a dam at the end of a valley: work started on the project in 1962; a church which was in the valley can occasionally be seen still in times of drought.