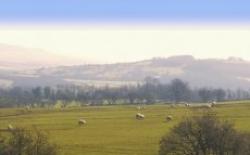 Cheltenham
Did you know that Cheltenham owed its existence as a spa town to pigeons? It is said that in 1715 someone noticed a particularly healthy looking flock of the birds pecking at a field on the edge of the settlement. When the ground was investigated a mineral spring was discovered, the waters salts the attraction for the birds as they would thereafter be for visitors. The town crest includes three pigeons to honour this debt.
Cirencester
Did you know that although in principle a tie is not possible in British electoral law  the same number of votes cast for two candidates requiring immediate resolution by the toss of a coin or similar method - it has in fact happened: the first time was in a by-election in Cirencester in 1892: originally Colonel Chester-Master (Con) was found to have won by just three votes; this was quickly challenged and the votes found to be equal. Rather than deciding the case by chance a further election was held  the Liberal winning that one. Roughly the same scenario was repeated in Winchester in 1997, though the two-vote victor there won the re-run too.
Gloucester
Did you know that Walls Ice Cream factory in Gloucester is the largest in Europe? It was built in 1959, and expanded hugely in 1981 when Unilever closed a plant in Acton and consolidated production in Gloucester. Walls was originally a meat company, which began making ices in 1922 to avoid laying off workers when demand for its sausages dropped in summer.
Did you know that the Crecy Window in Gloucester Cathedral is the largest stained-glass window in Britain? It measures roughly 24m x 12m and commemorates the participation of local knights in the victory at Crecy .
Did you know that John Stafford-Smith, who wrote the music to the US National Anthem "Star Spangled Banner, is buried in Gloucester Cathedral ? His father was organist there, and John Stafford-Smith studied at the cathedral school. The tune was briefly used as the national anthem of Luxembourg well before the USA adopted it officially in 1931.
Moreton In Marsh
Did you know that Sezincote in Moreton-in-Marsh was the inspiration for the later Brighton Pavilion? The house designed by Samuel Pepys Cockerell with its Mogul styling, minarets, and onion-dome, was built in 1810, five years before Nash began his work (in the best possible taste) in Brighton. Repton provided the garden design for Sezincote, again reflecting the influence of the sub-continent.
Stow On The Wold
Did you know the last battle of the English Civil War took place at Stow-on-the-Wold. It was fought on March 21 1646. The Royalist cause was lost, but 3000 men under the ageing Sir Jacob Astley were trying to make their way to the beleaguered Charles I in Oxford to buy him time. A Parliamentary army slightly superior in numbers  but more experienced - engaged Astley a mile from the town and quickly forced him towards a last stand in the market square, where he surrendered.
Stroud
Did you know that the lawnmower was invented and first demonstrated in Stroud in 1830 by local man Edwin Beard Budding? His mower was based on a textile finishing machine used to give woolen cloth an even surface. Budding by the way also invented the adjustable spanner.
Did you know that Cider with Rosie, Laurie Lee 's tale of country life, is set in and around Stroud and the South Cotswolds ? Laurie Lee was born in Stroud, and grew up in nearby Slad , returning there in his later years, one of his haunts the Woolpack Inn .