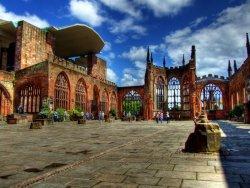 Review of Coventry by Nick on March 29th, 2007
Coventry has an abundance of interesting places to eat and drink. For instance, The Chace, in South Coventry is a former Doctor's house with huge paintings inside and ornate victorian fire places. There's also, The Windmill village, in Allesley with a cellar and views across the golf course and lake. Dick Turpin is alleged to have stopped here on his way from London to York. If your looking for something more modern then the old Fire station,(just opened 2007) Priory Place and the Skydome have lots to offer. Browns Restaurant is in an art deco style and has a rooftop terrace overlooking the Cathedral Spire. For a coffee, the Godiva tea rooms offers an underground medieval experience next to the historic Guildhall. A little known gem of Coventry. For fantastic countryside views around Coventry then the Old Mill, Baginton, near Coventry Airport on the River Soar is idyllic. The Quicken Tree, in Fillongly village also offers beautiful views near George Elliot Country. Brandon Hall near where Keeping Up Appearances was filmed offers stately splendor. Coombe Abbey is a very romantic place for a meal with a moat around it and landscaped gardens. Overall, Coventry is a fascinating place to visit if people leave their preconceptions of it behind and are prepared to travel around the city and suburbs.