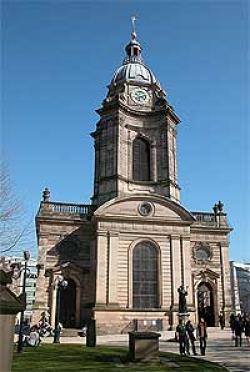 A wonderfully dramatic and eldgant discovery at the heart of the city. One of the most notable 18th century Church buildings, a rare example of 'English Baroque' style. Designed and built between 1709 and 1715 by the architect Thomas Archer, the building's success is due to a lightness of style and the use of clear lines. Note the Italianate domed tower, the huge clear windows and subtle ornamentation of internal features.

See the other treasures too, including the 18th century Schwarbrick organ (rebuilt and extended).