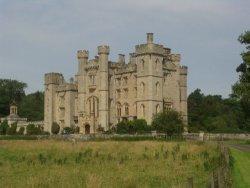 You could easily drive the 100 miles from Eyemouth to Dumfries in under three hours if you had to. Or you could spend a week on roughly the same route, motoring through the beautiful border country to explore the castles that symbolise so many different eras of Scotlands history.

Starting the tour at Ayton Castle near Eyemouth makes sense in that it is just off the A1 so easy to get to; but built in 1851 in grand baroque Scottish Baronial style for a banker it is in historic terms almost contemporary. Paired with a visit to Duns Castle, a 20 minute drive away, it makes sense though, as parts of the latter building transport you back to 1340, the historically distant in geographic proximity. Duns Castle itself offers accommodation, indeed staying there is the only way to visit, or you could book a suite in 17th century Press Castle in Coldingham near the lovely bay there.

Edging westwards towards Kelso you reach Hume Castle, a century or so older than Duns, its situation on a hill looking toward the English border speaking volumes about why it was built, and its use as a signal station in case of invasion. In Kelso itself you can see two strongholds in one place: within the grounds of 18th century Floors Castle, the Duke of Roxburghes home epitomising the vast wealth and power of Scotlands nobility in that age, stand the ruins of its forerunner Roxburgh Castle. In Heiton a few miles south The Roxburghe Hotel, also owned by the Duke, has architecture reminiscent of its grander stable-mate. Or base yourself in the town itself at the Georgian Ednam House Hotel or The Queens Head in the centre.

By way of contrast in the same district a visit to Smailholm Tower is in order. Just five miles west of Kelso this 15th century Pele tower provided shelter for people and their livestock during raids over the border by the English, seeing action frequently in the 1540s. If time allows another similar fortification at Greenknowe near Gordon merits a call.

Following the A698 further southwest brings you to Hawick, where another Pele refuge, Drumlanrigs Tower, can be visited on the High Street. The building now houses displays concerned with its history and that of Hawick. The Mansfield House Hotel built in the early 19th century on the outskirts of the town, offers a historic setting and award winning food after all that sightseeing.

Taking the B6399 from Hawick leads to the village of Hermitage and its famous fortification, once owned by James Boswell and visited by Mary Queen of Scots. This building boasts a plethora of bloody tales, and though ruined is still able to communicate its history to the observer. Striking across country takes you back to the A7 main route through the borders, where Mosspaul Inn stands roughly halfway between Hawick and Langholm.

Further along the A7, only a couple of miles from the border Gilnockie Tower has a history that reveals another aspect of the often violent borders existence  it was built by a great Reiver, Johnnie Armstrong, and today houses the Clan Armstrong centre. Beyond Ecclefechan stands Hoddom Castle, built to defend the route from Carlisle northwards into West Scotland. There is a caravan park in the grounds of the castle if the freedom of the road takes your fancy; alternatively in the town itself youll find the elegant Kirkconnel Hall Hotel, parts of which date from the 15th century.

North of Dumfries another fine example of the Scottish Baronial style, Friars Carse, is to be found in Auldgirth. The building has links with Rabbie Burns, which adds to its attraction, and these days it is a hotel to boot, so you can combine history with luxury. Finally we near the Solway Firth, which just like the land border had to be defended. Guarding the entrance to the River Nith, the route to Dumfries, is Caerlaverock Castle, possibly the most striking of all those listed here and accordingly much photographed. Unusually the 13th century fortification is triangular, set behind a moat. It saw action in the wars of Edward I, when just 60 men in the castle held a great army at bay time and again before finally surrendering. Information Britain lists many accommodation options in nearby Dumfries, including the award winning Cavens and the Aston set in a large estate.

Given that the actual distances to be covered are not great, though hotel hopping is a pleasure, you might prefer to rent a home-away-from-home: Dales Cottages, Cottages in the Borders, Scotland Cottages and a wealth of independent lets are listed on the relevant county pages of the website.

This guide has focussed on the historic castles to be found along the Scottish side of the border. Do check on opening times before planning your visit. But even if some sites are closed when youre there, theres a multitude of other activities available to those touring the area: Hawick is famed for its luxury textiles; at Caerlaverock there is a wildfowl centre; more golf courses in the area than its practical to list dot the region; in season there is wonderful fishing and shooting, and of course plenty of walking for the energetic; and remember the food too: smoked fish; game; and local cheeses among the many delights of the table. And soon it is hoped the Annandale Distillery, closed back in 1921, will re-open, which is another good reason to plan a trip.