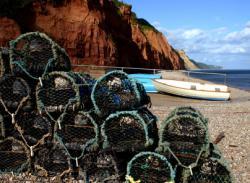 A Culinary Tour of Devon

If there is a county in Britain with a richer larder than Devon it is doing well. With coasts on both the Bristol Channel and English Channel its fish is legendary. Rich pastureland means a tradition of fine meats and cheeses. And craft food-makers have gravitated to the area since the 70s, attracted by the mild climate and the beautiful scenery, and naturally the tourist trade they bring.

The place lands some of the finest seafood (and accordingly excellent seafood restaurants ) in the country, its crab a particular wonder (the French and Spanish realise it and buy the majority). The villages of Beer and Clovelly are particularly famed for their catches, the latter with a herring festival in November and a touch more luxuriously a lobster and crab feast in September.

That seafood is used to great effect by more restaurants than can be mentioned here, Exeter especially famed for its eateries, but one in Dartmouth gives an idea of the riches: Restaurant Angélique .

But food without drink is like a summer without sun as the French say. You may want to use taxis during your trip. There are now more than a dozen vineyards in the county including Down St Marys in Crediton, Eastcotts near Okehampton, Clawfords in Holsworthy, and one of Britains best-known, Sharphams near Totnes. Time your visit right in May and enjoy the countywide wine week. Plymouth makes arguably the most characterful gin in England. And most months see a festival celebrating locally brewed beer and cider  our events list has details.

Information Britain has hundreds of hotels and smaller establishments in Devon, many of which have built their reputations and clientele on great local food  check them out on the site: and dont just think comfortably cosy inns ; there are some very smart boutique places these days; and of course the grandeur of the English Riviera .

Food is built into the very folklore of the place: Barnstaple s famous fair in September has its own historic dish of Barnstaple Pears ; the ram roast at Kingsteignton every May is built on a love of full stomachs; and in July youll find a wonderful survival of medieval times, the ceremony in Ashburton where ale is tasted for quality and bread weighed for quantity. Foodies may want to hunt out some other traditional local dishes: Okehampton should yield Hogs Pudding ; and Collumpton its delicate junket at the other end of the dairy scale from the famous Devonshire clotted cream ; but (mores the pity) good luck with finding a restaurant serving Exeter Pudding or Dartmouth Pie . You could always drown your sorrows with local gin  and even visit the Plymouth distillery where it is made.

Eschew the soulless supermarket and head for a farm shop or better still a farmers market . We list a wealth of such events and outlets. There and at specialist food shops you really must search out Sharpham and Beenleigh Blue Cheeses; Salcombe Smokies from Kingsbridge (smoked mackerel with class); and what some chocoholics claim to be the best chocs in the UK, those made by Melchior in South Molton .

Good food of course benefits from great places to eat it: a summer picnic will taste better in a secluded cove than any municipal or even royal park. Even if it is not the right weather for picnics when youre at the coast you wont be far from a chippie  sea air nearly as good an appetiser as hunger. And chilly Dartmoor justifies getting outside some sarnies made with local bread and maybe some rare breed meat - Swardicott Farm near Beaworthy one of many suppliers  it has cottages for those who fancy getting close to their food; likewise Cheristow Farm near Hartland .

Great food in Devon is no fantasy: but if pushed to fantasise, how about a G&T made with Plymouth Gin as an aperitif; Devon Crab with chilled local white wine; organic chicken poached in local cider and cream with a glass of that dry cider; and fresh-picked fruit. Or maybe just a massive massive cream tea. Nearly made it through without succumbing to a mention of that temptation.