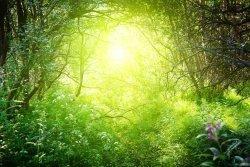 It may be stating the obvious, but the best reason for visiting the National Forest in October is what New Englanders call leaf-peeping. Stuck in the office from dawn to dusk you can miss the glorious natural palette of hardwood trees as their leaves turn and fall: copper; rust-red; old gold; silver-grey and every shade between caught in the gentle seasonal light. Take a forest-trail and breathe that special scent saying the year has turned.

The 200 square miles of Staffordshire, Derbyshire and Leicestershire land that were chosen for the creation of a new forest, conveniently for most of us are in roughly the middle of England, a wide band stretching from just above Leicester in the south-eastern corner to Burton-on-Trent in the north western. The plan is to achieve a 33 per cent forestation of the area, from a base figure of 6 per cent in 1990. Already the new plantations and a thousand small schemes have seen the tree coverage rise to more than 18 per cent.

Burton is the biggest town in the National Forest, home of marmite and... what was that other thing? Beer. Hoppy, minerally, tasty beer traditionally, celebrated in the National Brewery Centre and some splendid pubs. As a thriving brewing centre it has plenty of business hotel options like a Holiday Inn Express, Ramada, and The Bretby; or you can go the historic route at places such as the Three Queens which has its roots in Tudor times; the elegant Brookhouse Hotel; or the Arthurian-themed Grail Court.

A few miles along the A444 sit Swadlincote, Rosliston and Moira, the last of those the home to the Forests information and activity centre, Conkers. Nearby there is the Beehive Farm Woodland Lakes camping complex, an alternative type of accommodation that makes sense to get closer to those trees; or you could opt for Rosliston Forest Lodges for the same reason. As a reminder that the forest project is only recent history, visit Moira Furnace for a glimpse of the industrial past, and enjoy the short restored section of the Ashby Canal beside it.

Ashby-de-la-Zouch itself is a bustling place with its own castle and museum: the black-and-white fronted Queens Head, a 17th century coaching inn, is in the centre, enjoying some lively nightlife over the weekend if you get tired of trees; or for caravanners theres a site at Ingles Hill Farm off the Burton Road. Information Britain lists two other hotels in Ashby: the winged and porticoed Royal on Station Road; and a Premier Inn.

At the eastern extent of the National Forest youll find Coalville, once the mining centre that is recalled at its Snibston Discovery Park, contrasting with the genteel past explored in a visit to Donington-le-Heath Manor House nearby. Coalville and its environs offer various accommodation options to choose from: the Charnwood Arms Hotel, formerly a country house; the solid Queen Anne structure that is Ravenstone Guest House in the eponymous village; and the modern Hermitage Park by Charnwood Forest.

If the confines of the forest are not enough for you, it is surrounded by places like Leicester, buzzing with student-inspired nightlife and a great place for a curry; Uttoxeter for the racing; Melton Mowbray for the worlds best pork pies; and the famous Donington Park, centre for concerts, motor racing and even a celebrated car boot.

Access to the area could hardly be easier: the M1 strikes through its eastern edge; the M42 stops at its southern side; and the A50 and A38 trunk roads converge on Burton, which also has a railway station.