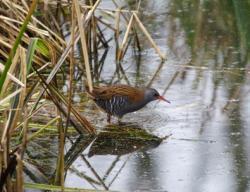 Thanks to the A1, M11 and A14 Cambridgeshire is easily accessible for the majority of Britons lucky enough to own a car. For the English (barring the Cornish peninsula) and most of the Welsh at least it is perhaps only a two or three hour car journey away, thus a good spot to consider for a weekend break. And if you are a confirmed birder it is a great spot for such a trip.
Why is the county such a draw for bird-spotters? For a start over the year more than 300 species are likely to be in someones binoculars. And those species occupy a wide variety of habits  marsh, woodland ancient and new, the fens , meadows, the fascinating Ouse Washes, old gravel pits and even Englands third largest area of inland water in the manmade Grafham Water.
Take a decent map of the area and you cannot fail to notice the number of sites marked with the little red bird that denotes a bird or wildlife sanctuary. Look around Soham and Fordham for example, and youll see Fordham Woods, Chippenham Fen, Soham Meadows, and five minutes westward the internationally important Wicken Fen. Or glance at Peterborough and its environs: there is the woodland site at Castor Hanglands, Nene Park and the Ferry Meadows to the west and Nene Washes to the east, plus a slew of old diggings like Dogsthorpe Star Pit.
But in a quick trip youll be interested in quality not quantity of sites, so consider focussing on one or more of the following four reserves offering particularly rich spotting opportunities, and pleasant surroundings to boot.
Firstly the previously mentioned Wicken Fen , a 15-minute drive from Ely . This was the first nature reserve the National Trust acquired, ensuring this survival of the ancient un-drained fen habitat would be kept for the nation. Its reedbeds, marsh and fenland environments are rich in plant and insect life, thus supporting a wide range of birds, notably five owl species, Water Rail, and Green Woodpeckers, with seasonal visitors including the Goosander, Merlin and the Bittern (which as all Chaucer lovers know, bombleth in the myre, and there is a good bit of myre in the eight square kilometre site).
The Ouse Washes between Littleport and Chatteris are our largest area of grazing washland, where the water that floods the habitat in the winter months is inviting for many species of duck including Widgeon, and both Bewicks and Whooper Swans. The dryer conditions of spring bring Redshanks and Lapwings to the fore, not to mention Black-tailed Godwits and migratory Garganey. In summer - if you are quick  theres a good chance of seeing the petrol-blue flash of Kingfishers, and both Grey and Yellow Wagtails.
Fowlmere on the north-eastern edge of Melbourn is another wetland reserve, where reeds have colonised what used to be watercress beds. The three hides (one accessible to wheelchair users) offer the chance to spot various warblers, including Grasshopper Warblers, and in winter Corn Buntings.
Last but absolutely not least is Grafham Water , north of St Neots and west of Brampton. The vast reservoir, about 10 miles round, was made by damming a valley in the 1960s. To the west of the lake a nature reserve has been created with woodlands, reedbeds and willow-rich wetland, those diverse habitats making for equally diverse birdlife. This is probably the best place in the county for rarer species, past sightings including Golden Oriole, Wilsons Phalarope, Firecrest and Pectoral Sandpipers to name but four. There are car parks all around the lake, and a cycle path that rings the water if you can transport your bike with you, a good way to get to the less accessible corners.
For a bit of variety with obvious birder attraction the area has two sites worthy of mention: in the lovely city of Cambridge youll find the Museum of Zoology in Downing Street, with some stuff that will definitely appeal to the younger members of the family (massive whale skeleton for one); and at Woodhurst north of St Ives and Huntingdon there is the Raptor Foundation located within a 30-acre site. The foundation puts on the flying displays that are always a winner with kids.
If you are travelling without a family in tow it is easier to enjoy some of the wildness of the fens, the otherness. The Cambridgeshire countryside is a good place to blow away the cobwebs  and in winter and autumn in particular the winds blow frequently and with gusto across the largely flat landscape. Dont forget the walking boots, and (as if it needs saying) camera, bins or scope, and a good warm and waterproof jacket. Though if you settle down in a nice quiet inn by the fire they may be superfluous.
A birding break for some of us somehow calls for a stay in a country pub or a hotel away from the urban environment, though Cambridgeshires market towns like Huntingdon and St Neots are very pleasant and interesting in themselves, and the varsity city of Cambridge is of course one of our finest with its ancient colleges and plentiful waterside. Browse our accommodation pages for the county and youll see a wide variety of places to stay, with of course cottages away from it all another option for the long weekend-stayer or if you are planning a full seven days.