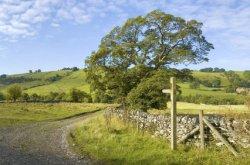 Burton upon Trent
Did you know that the first jar of Marmite was produced here in 1902? Burton thanks to its excellent water is the capital of British brewing . Marmite is an off-shoot of the beer industry there, using brewers yeast by-product to make the nutritious  rich in B vitamins - spread you legendarily either love or loathe.
Flash
Did you know that Flash is, at 1518 feet above sea level, the highest village in Britain? Wanlockhead in Dumfries and Galloway disputed the honour, resolved by the Ordnance Survey taking the most elevated building in each as the benchmark. The Guinness Book of Records accordingly goes with Flash, though that still doesnt make Flash saviour of the universe. A-ah.
Lichfield
Did you know that Edward Wightman was the last person in Britain to be burned at the stake for heresy and this took place in Lichfield Market Square on April 11 1612 ? Wightman was a radical Christian from Burton, his beliefs most nearly reflecting those of the Anabaptists. He was examined closely by theologians, James I himself condemning his views. Having already recanted on a previous occasion when the flames had begun to burn him, his cries to be spared the second and fatal time were ignored.