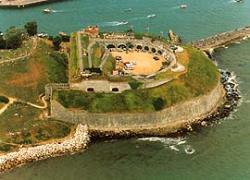 Did you know that many of the questions for the original 'trivial pursuit' game were researched in the public library in Weymouth.

Did you know that two ships  one of them from Bristol - that docked at Weymouth in June 1348 are believed to have brought the Black Death to Britain? It was Melcombe at the edge of Weymouth that first showed signs of the epidemic, believed to have been carried by a sailor recently in Gascony. By the time the first wave of the plague died down (it didnt die out) about half the population of Britain had succumbed to the disease.