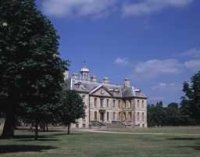 Britains stately homes are a part of our history, albeit an exclusive part. Their landscaped gardens and parks offer a view of that history, or just the chance for the kids to run off some energy. Some like Wimpole Hall near Cambridge even offer period food to complete the experience. Our stately homes provide snapshots of history: Calke Abbey near Derby shows how fortunes of the great can decline; Blickling Hall, the Boleyn family home near Aylsham in Norfolk with its superb library and gardens shows how the elite in Tudor times were becoming cultured; Florence Court in Enniskillen, a magnificent Georgian pile, shows the Irish aristocracy isolated, yet still Irish with local furniture abounding. So many stately homes have enormous gardens to enjoy, and these days other pleasures within them  Belton House near Grantham has a fantastic adventure playground; Erddig near Wrexham has woodland walks plus the national collection of ivies; Somerleyton Hall near Lowestoft has a marvellous maze. But it is the ostentation, the grandeur, that most want to see. Castle Howard in Yorkshire would be a good place to start. Kedleston Hall near Derby has some of the best Adam interiors in England; and Berrington Hall in Herefordshire with its Capability Brown gardens shows the wealth of the elite, able to alter the face of the earth. While most stately homes were built in the 18th century when fortunes were being made(in the colonies - and from slavery), the timescale runs from medieval times  take Clevedon court in North Somerset  to the Victorian era  Lanhydrock in Bodmin being a good example. Visiting a stately home is one of our great day trip traditions, and getting better all the time. With the country dotted with them, you dont even need to venture far from home.
We also include 1000's of Historic Houses