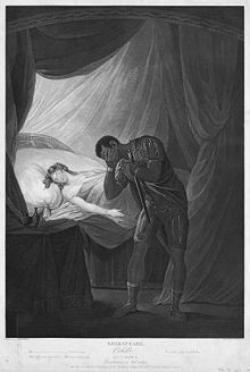 When the first known performance of Shakespeares Othello took place on November 1 1604 at Whitehall Palace the playwrights company, The Kings Men, were beginning their second season for King James I . As their patron James was somewhat more enthusiastic than Elizabeth , and would see the premieres of several of Shakespeares plays, including the Tempest in 1611 at the same site, and in 1606 Macbeth at Hampton Court .
The sources of Shakespeares knowledge are often unclear, but in the case of The Moor of Venice we know that he almost certainly took the story from an Italian prose tale of 1565. The immediate inspiration for the character of the black general may, however, have been a real-life figure, the ambassador to Queen Elizabeths court sent by the King of Barbary in 1600.
Richard Burbage, a share-holder in the Kings Men along with Shakespeare and others, and the co-provider of the material for The Globe , was it appears the first Othello. He was one of the great actors of his age, who would also two years later take the title role in Ben Jonson s Volpone.