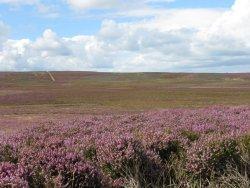 The North York Moors are one of Britains great natural assets. Much of the land was made a National Park in 1952, encompassing an area of more than 550 square miles, within which about 25,000 residents rattle. There are no towns of any great size within the district, with the smaller centres of Whitby , Pickering and Northallerton being the best known settlements there.

The National Park extends from the Vale of Pickering in the south almost to Guisborough in the north, and from the cliffs and beaches of the North Sea coast across towards Northallerton. There are two principal river systems in the area, the Esk in the north and the Derwent in the south, with lesser rivers like the Rye, the Riccat and the Seven also draining the hills.

The area offers a wide variety of landscapes, but the predominant scenery is the heather moorland that provides a habitat for birds like the redshank, the lapwing and of course the red grouse that provides many in the park with a living, servicing the shooting parties and looking after their prey. The moors offer cover for adders, living off the voles and mice they find at the edge of the heather, and the lizards within it, though you are unlikely to see any, they are very wary of humans and tend to disappear rapidly when they sense approaching feet.

The moors provide grazing for the many sheep farms across the Park, with around 3,000 people employed in farming there.

There is plenty of grassland too, where birders will find wheatears and golden plovers. At the coast the cliffs provide shelter for vast numbers of gulls, but of more interest perhaps are the curlews, pipits and stonechats. To complete this brief tour of the habits on offer there is the remaining woodland, where owls, wood warblers and sparrow hawks may be found.

Woodland is still dotted about the Park, but when humans first arrived there about 8,000BC the whole area was densely wooded. There are signs of human habitation through prehistoric times to be found at a multitude of sites, from the Stone Age through the Iron Age . The Romans left their mark too, with coastal signal stations and several camps, their northern administrative centre of York being close by.

The Saxons occupied the land after the Romans left in 410AD, for centuries engaged in conflicts with the raiding Vikings who were attracted by the wealthy religious foundations like Whitby Abbey and St Cedds in Lastingham.

The Norman Conquest offered stability to the area, and saw the expansion of the power and presence of the religious orders: Rievaulx Abbey in the Ryedale area is the greatest evidence of this, though Byland Abbey in the Hambleton Hills comes close.

In later days the area was exploited for its natural resources, Alum mining providing processing material for the countrys textile industry, and iron ore for machinery and weapons, attracting the growth of the railways through the 19th century. More romantically jet was also mined here.

As well as the great religious foundations there are some spectacular secular buildings to be found here: the castles at Pickering and Helmsley , and just beyond the Park at Scarborough , offer a view of the troubled past, while Scampston Hall , Duncombe Park , and Shandy Hall offer a ticket back to a more refined era for those who held the wealth. Shandy Hall was owned for a time by Laurence Sterne , author of Tristram Shandy. Another literary link attracting many is Bram Stokers Dracula, partly set in Whitby.

A more modern attraction (and less likely to frighten the children) is the North York Moors Railway , its steam trains and vintage diesels running between picturesque Pickering and Grosmont, though at certain times the link beyond that to Whitby is open. The Captain Cook Memorial Museum in Whitby will fascinate any aspiring explorers, celebrating Cook's Whitby years and his later achievements.

There are numerous other reasons to visit: the lovely beaches , the old fashioned splendour of Scarborough, and the terrific local brewing tradition  many of the pubs will feature traditional Yorkshire ales made by Theakstons and the Black Sheep Brewery . But the greatest reason is still probably the feelings of space and of tranquillity that the Park can offer in places where the only noises are bird calls and the gentle soughing of the wind.