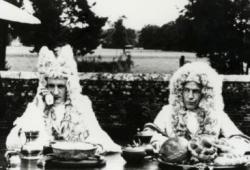 Reactions to Peter Greenaway s 1982 film The Draftsmans Contract differ wildly: to some it is pretentious and poorly put together; for others a unique masterpiece. Linking both viewpoints, the original cut was almost twice as long as the final 103 minute edit, so there are anomalies  the famous living statue never explained for example  some perhaps unintended though this adds to the disturbing just slightly unreal feel. It is something no mainstream studio would have financed (no helicopter crashes), so thanks are due to Channel 4 and its creative remit. Man cannot live by romcoms and thrillers alone. Greenaway trained as an artist; taking that as a starting point helps explain the fascination of the piece: it is visually mesmerising; the landscapes and interiors almost paintings in themselves (as they naturally are to the draftsman) and those interiors in turn full of paintings; the costumes and wigs out of phase with reality; the lead actor Anthony Higgins as beautiful and his character as odd as the setting. As drama it is equally strange, a puzzle piece, though the clues are more obscure than the solution to that mystery, and the resolution of the story unexpected and violent. The feel of the piece is enhanced by Michael Nymans minimalist music, dominated by saxophones yet largely based on scraps by Purcell ; and the cast which includes Janet Suzman and Hugh Fraser (and Lynda La Plante in a small role) plays up to the stilted and mannered oddity of Greenaways script and direction which pulls all these elements into an amusing and ultimately rewarding whole.