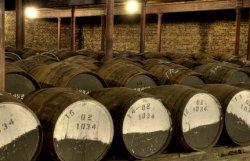 Single Malts in the Hebrides

You eat an elephant a bite at a time; and you tour Scotlands whisky distilleries a region, or even part of a region at a time  unless you have unlimited leisure, funds, and confidence in the recuperative powers of your liver. For the adventurous in terms of travel and taste, the best place to start is the Hebrides.

Five of the Hebridean islands have working distilleries: Islay, Jura, Mull, Skye and Lewis; and there are well-advanced plans for a new one on Barra. A comprehensive tour of the dozen working plants will require some ferry timetable shuffling, though it is of course possible to reach Skye by the bridge now: Barra is five hours from the mainland; Lewis a little under three; Islay is served by several routes including ships from Kennacraig on Kintyre; and Mull is 45 minutes sailing from Oban. If you fancy flying  or happen to have your own plane  Barra has a unique airport, using the beach at low-tide only for obvious reasons.

With limited time Islay is surely the destination of choice: the island is famed in whisky circles for its three peaty monsters, namely Laphroaig, Lagavulin and Ardbeg, situated within a stroll of each other; but it has five others including the stunningly lovely Bunnahabhain, complete with wreck just offshore, its own pier, and unparalleled views of Jura across the water. Bunnahabhain is an unpeated dram, a rich fruit-cake of a scotch; Bowmore for many has a hint of seaweed; Bruichladdich loves playing different tunes with each expression; the tiny Kilchoman distillery is very new but already interesting; and Caol Ila offers more restrained peat than its cousins. Every drinker in every bar on the island knows the secret of which is the best whisky there, though if you can get two to agree youre doing well.

Islay is not just about whisky of course: it has fantastic brown trout fishing; lovely empty beaches; a wealth of history, and a welcoming attitude  drivers wave to every vehicle they pass regardless of acquaintance.

The Harbour Inn Hotel is within smelling distance of the Bowmore distillery, and has a terrific restaurant with equally excellent whisky selection for some revision or preparation. Just opposite is the Inns-Over-by, only a few strides from the sea; or inland theres the Ballygrant Inn which has three guest rooms a mile or so from Caol Ila. A short ferry ride from Port Askaig on Islay takes you to Jura, whose eponymous distillery produces some lovely whisky hinting at malted milk. There are fewer than 190 permanent residents on Jura, with about a square mile of space each if they divided the place up, so a fine destination for peace and quiet and undisturbed walks.

Mull has just the one distillery, Tobermory in the town of the same name, and a prettier spot you couldnt wish for, the painted houses made famous by the childrens TV series Balamory. And with Duart Castle and Torosay Castle open from Easter to September you can get your culture fix at the same time. Information Britain has no fewer than six recommended hotels on Mull: The Tobermory Hotel and Highland Cottage Hotels in the metropolis that is Tobermory; Killoran House in Dervaig which is no distance from the town; and further away The Isle of Mull Hotel in Craignure; Tiroran House (which also has cottages) on Loch Scridain, and The Argyle Arms in Bunessan.

Skye is another island with just the one distillery  Talisker  whose scotch is famed for a bright peppery style with a suggestion of lemon zest, a whisky you might sip with the seafood that the region provides in plenty. We have 37 places to stay on Skye, but for the Talisker Distillery in Carbost (careful there are two Carbosts on the island) how about the distinctly posh Bosville Hotel in nearby Portree; though foodies may consider a few extra miles to the famous Three Chimneys restaurant with rooms on Loch Dunvegan well worthwhile.

Lewis is the only one of the Outer Hebrides currently producing whisky, the Abhainn Dearg distillery having been founded in 2008. Laudably the company intends using local organic barley in its future production. Stornoway, the de facto capital of Lewis, has three hotels recommended by this site: The Royal; Cabarfeidh; and Caladh all bookable online.

Barra whisky wont be available until 2013 at the earliest from production slated for 2010, but whisky lovers may be drawn before then by the romance of the project, and the associations with Whisky Galore which was set on the island. Most if not all the distilleries are open for tours, though you should check this in advance as some require notice.

The beauty of a whisky trip is that the weather is incidental: you may even aim for a cold season trip on purpose to get the snuggle factor going  log fire; single malt; full stomach. The islands are lovely in the summer; starkly beautiful in the winter; almost as fascinating as the whisky they produce.