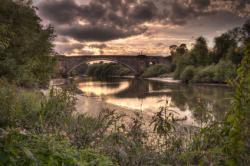 In the Footsteps of the Legions  Roman Chester

For most of us popping over to Italy for the weekend to see the Coliseum and some of the other major Roman sites is a bit beyond our pockets. Not so, perhaps, a break in Cheshire, easily reached via the motorway network, train, or flights to Manchester Airport .
London eventually emerged as the trading centre and capital of Roman Britain , but apparently that wasnt the initial plan  Chester was probably intended to serve as Britannias principal settlement, a theory supported by the size of its amphitheatre, and by the fact that its fortifications were larger than Yorks, garrisoned by a whole legion of up to 6000 soldiers.
Though Chester will be the focus of this break, one other site is suggested for a visit  the countys Salt Museum on London Road in Northwich , telling the story of salt production in Cheshire for thousands of years  the trade was an important one for the Romans.
It is Chester , however, that in a relatively small area offers several major sites giving us a glimpse of the Roman occupation. Chester has the most complete medieval town wall system of any English settlement, some incorporating earlier stonework. While walking around them look at the lower levels on the northern side especially, where whole sections are the Roman originals. Thats lasting craftsmanship! The foundations of one of the corner towers are uncovered at the south eastern side too.
Visitors to Chesters Roodee Racecourse , the oldest in the country, will probably be intent on the horseflesh, but the site was originally the harbour area of the Roman fortress. The River Dee was at that time navigable, the roman settlement of Deva (later Deva Victrix taking part of the name of one of its guardian legions) that evolved into Chester exported lead and copper from Welsh mines, and imported olive oil, wine and other necessities of civilised existence. The old quay is still evident here.
A little outside Chester proper you can visit a site of great interest to Roman history-lovers. Just over the Old Dee Bridge is Handbridge, where the only rock-cut Roman shrine remaining in Britain stands, this survival dedicated to Minerva. It was probably made by the men working the sandstone outcrop into which its carved, a rather personal link with our ancestors. The ford used by the Romans to cross the Dee still exists today too in the same area.
Within the city there are several sites of note: you should not miss walking in the Roman Gardens , where sandstone columns and other weighty artefacts from Deva Victrix can be seen, including a reconstructed hypocaust system (under-floor heating). An original hypocaust can be seen in the rather unlikely surroundings of the Spud-U-Like restaurant on Bridge Street in the centre. Miss Selfridge on Northgate Street has remains of another in a back room, that particular one providing the Legionary Commander with some creature comfort.
The citys Grosvenor Museum has an extensive display of small items dating from the Roman period, though small is a relative term  its best-known collection is of 150 Roman tombstones, which gives a glimpse into a multi-cultural era 1900 years before our own, evidencing Spanish, Barbarian and even Greek roots for some of those commemorated.
Children who may get grumpy in a more traditional museum setting will love the Dewa Roman Experience on Pierpoint Lane just off Bridge Street in the city centre, with plenty of hands-on stuff to do, activities to give a flavour (and the occasional smell) of Roman life, and loads of authentic Roman artefacts, a good way to spend a couple of hours of fun that for kids is the best way to learn.
But the big one as regards Roman Chester is its vast amphitheatre  and its free to visit! It seated between 8000 and 10000 people, what they watched the subject of much academic debate  demonstrations of military skill to help train the legions; theatrical events; or spectacles like the torture of criminals, gladiatorial combat, or fights between animals. Maybe it was all three. But its simple scale would have been a symbol of Roman power to the tribes-people of the area.
Unfortunately much of the original stone, as so often, was borrowed by our medieval ancestors for their own construction projects  in this case a nearby church and to extend and reinforce the citys walls. Excavation has revealed the size of the place, however, and work has been done to resurface the arena and provide landscaping in harmony with the original sweep of the seating, with plenty of signage to explain what was what here. And there is enough original stone to give the amphitheatre atmosphere even now.
Naturally there are plenty of other good reasons to visit Chester : the shopping is some of the best in the North, the historic Rows (two-storey shopping streets) of cultural as well as retail interest too; no shortage of fine black-and-white architecture either. And the city is well-known for the quality of its restaurants and bars . So mix some history with less cerebral pleasures - though the Romans would have appreciated the good food as much as you will.