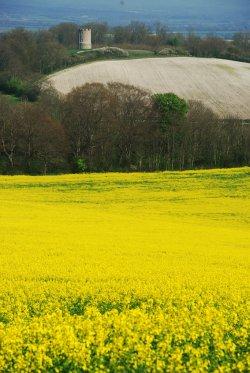 Abingdon
Did you know that until 1870 Abingdon was the county town of BERKSHIRE ? The building that served as its County Hall (and had room beneath it for market stalls) is according to local lore one of Christopher Wren s. Not only did it lose that status in 1870, but indignity heaped upon indignity 104 years later boundary changes shifted it to Oxfordshire.
Aynho
Did you know that in medieval times residents of the village of Aynho on the Northamptonshire-Oxfordshire border paid part of their rent to the Lord of the Manor in apricots? The limestone soil and the warmth provided by the stone cottages helped the sometimes delicate trees thrive there. The village still has many apricot trees climbing sunnier cottage walls.
Cottisford
Did you know that Lark Rise to Candleford author Flora Thompson based Fordlow on the Oxfordshire village of Cottisford where she went to school? Or that Lark Rise was modelled on Juniper Hill? Landmarks in the two settlements south of Brackley that admirers of the novels (and TV versions) can still spot include St Marys Church and The Wagon and Horses (now a private house, once The Fox Inn).
Mapledurham
Did you know that Mapledurham House is the original setting for Toad of Toad Hall? Or so some suggest - there are at least four other contenders, however: Cliveden (too grand even for Mr Toad?); Constable Burton Hall in Yorkshire; Foxwarren Park near Cobham ; and Lullebrook Manor in Cookham Berkshire. Of them all Mapledurham has perhaps the charm seen in E.H. Shepard s drawings; but Lullebrook Manor may have been Grahame s inspiration, near his childhood home The Mount and the house he moved to with wife and son in 1906, Mayfield.
Oxford
Did you know that Oxfords Ashmolean Museum is the oldest public museum in the world? Established thanks to the generosity of Elias Ashmole , it opened its doors to the public on May 24 1683 . The basis of its original collection, by the way, came from Lambeth .
Did you know that Radcot Bridge at Oxford is the oldest bridge over the River Thames ? It dates from around 1150, built by Cistercian monks. In 1387 the bridge was badly damaged during a battle which takes its name  Richard II s forces defeated by those of the future Henry IV .
Woodstock
Did you know that legend has it Sir Winston Churchill was born in a ladies toilet during a dance at Blenheim Palace ? His mother went into labour early, brought on by a fall while out with a shooting party. Churchill refused to confirm or deny the story, once supposedly saying: Although present on the occasion, I have no clear recollection of the event.
Did you know that Sir John Vanbrugh never got to see the completed Blenheim Palace that he designed for the Duke and Duchess of Marlborough? The Duchess loathed him, and he was angered by her use of second-rate (to his eyes) craftsmen to finish the great project. His plans were employed to the end though he was not. When he visited Blenheim in 1725 to see his creation he was barred from entry at the gate.