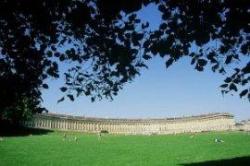 Bath
Did you know that Pulteney Bridge in Bath, which has shops on both sides of its span, is one of just four such structures remaining in the world? Similar developments were not uncommon in bygone times. The bridge was designed by Robert Adam (his only work in Bath) and may have been based on the Ponte Vecchio in Florence, or possibly the design Palladio submitted (and had rejected) for the Rialto in Venice.
Did you know that the worlds first postmark was stamped at Bath on May 2nd 1840? The letter was addressed to a house in Peckham , London. Rowland Hill s new-fangled penny black stamps had been distributed country-wide for a grand first day launch on May 6, but Baths Broad Street main Post Office jumped the gun and began selling them on May 2.
Saltford
Did you know that Saltford near Bath contains the oldest continually inhabited house (rather than religious building converted to house) in England? Much of the structure of Saltford Manor House dates from the 12th century, possibly as early as 1148, and the magazine Country Life in 2003 determined it the oldest in the land. Not many other domestic residences can boast a Norman arch and window, and fragments of a medieval painting.