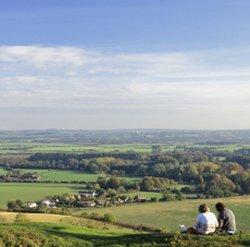 Arlesey
Did you know that Arlesey in Bedfordshire lays claim to be Britains 'longest' town? It stretches for 3 miles along the River Hiz but has only 6,000 residents
Bedford
Did you know that Cardington near Bedford still has the Brobdingnagian sheds built to make and house the R31, R32, and R101 airships among others? The imaginatively named Shed 1 is 812 feet (247m) long, 180 feet wide, and 157 feet tall, has a door that weighs 470 tonnes, and covers an area of five acres; its twin Shed 2 is not much smaller. Amazingly one of them is in use again for airship development.
Biggleswade
Did you know that the worlds first tractor was invented in Biggleswade by local Daniel Albone in 1901? Albone had been a successful racing cyclist, and established a cycle manufacturing company in his hometown. He patented the Ivel Agricultural Motor, the first light tractor, in February 1902, a three-wheeled petrol-driven vehicle far more suited to mechanizing farm-work than the traction engines tried hitherto.
Dunstable
Did you know that the first ever play recognizable as such recorded as performed in England was written in Dunstable by Geoffrey de Gorham in the 12th century? He staged it at Dunstable Priory . For the play he borrowed some clerical capes as costumes. They were destroyed in a house fire, and in an act of penance the proto-luvvie became a monk at St Albans Abbey .
Did you know that Dunstable Priory was the scene of the end of Henry VIII 's marriage to Catherine of Aragon ? It was here in May 1533 that Thomas Cranmer (who had once been chaplain to the Boleyn family) pronounced their marriage illegal and thus null and void on the grounds that she had been married to his brother Arthur previously.
Potton
Did you know that in St Johns Church (Cockayne Hatley) is buried both the poet W.E. Henley , who red bearded and walking with a crutch inspired Robert Louis Stevenson s Long John Silver; and his daughter Margaret, the inspiration for Wendy in JM Barrie s Peter Pan. Henley is best remembered for his poem Invictus, the last two lines of which read: I am the master of my fate: I am the captain of my soul. Wendy (never a name before Barrie used it) came from Margarets mis-pronunciation of friend as fwend.