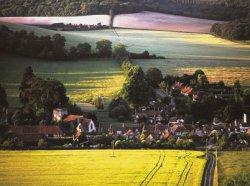 Aylesbury
Did you know that the TV series "Midsomer Murders" is shot (stabbed, drowned, poisoned and bludgeoned) in and around Aylesbury? While John Nettles is the ostensible star of the series which has produced more corpses than a biblical plague, the Chilterns and Vale of Aylesbury villages that provide its picturesque locations have won a multitude of admirers of their own around the globe, many fans now making Midsomer Murders pilgrimages: This was where the man ate the death cap mushrooms...
Beaconsfield
Did you know that the Bekonscot Model Village in Beaconsfield is the oldest model village on earth and inspired Enid Blyton to write about Toytown and its most famous resident Noddy? It was built in 1928 by a wealthy accountant at his country home, his wife having given an ultimatum that his model train had to leave the building. Originally a hobby and to amuse friends it was opened to the public in 1929 to great acclaim. Laudably all its profits go to charity.
Ellesborough
Did you know that Chequers, the country residence of British Prime Ministers since 1917, was once used as a prison for the younger sister of Lady Jane Grey? The house, near Ellesborough in Buckinghamshire, also has links with Cromwells family, and contains many artefacts and other memorabilia related to the Lord Protector  which perhaps gives pause for thought to any royal personage invited there (and entrance for all is by invitation only).
High Wycombe
Did you know that Sir Francis Dashwoods notorious Hellfire Club met for its orgies and dubious rites at Medmenham Abbey near Wycombe? Dashwood installed suitable statuary in the grounds, their subjects including Venus and Priapus, and had caves excavated to hide his groups activities from public gaze. In 1762 Sir Francis, famous for his drinking, pranks and womanising, was made Chancellor of the Exchequer where his tax on cider led to riots.
Marlow
Did you know that Mary Shelley prepared Frankenstein for publication whilst living with her new husband in Albion House, Marlow? They shared the house with Claire Clairmont and her child, Alba, fathered by Byron . Previously, while Percy Shelley s first wife still lived, Mary and he had lived for a time at 47 West Street in the town, the home of Thomas Love Peacock .
Stoke Poges
Did you know that in the James Bond film Goldfinger the Stoke Park Club in Stoke Poges doubled for Royal St Georges ? The club has made more film appearances than many actors: in Bridget Jones , Layer Cake , and another Bond epic Tomorrow Never Dies among others.
Did you know that Thomas Gray wrote his Elegy in a Country Churchyard in the graveyard of Stoke Poges church? His mother and aunt lived in the village. He also wrote Ode on a Distant Prospect of Eton College there. Fittingly the poet and his mother are buried in the churchyard.