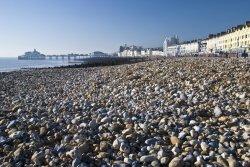 Alfriston
Did you know that the first building acquired by the National Trust was the Clergy House in Alfriston? The Trust bought the 14th century hall-house overlooking the green there in 1896, paying £10 for it, not a bad price for a thatched timber-framed house in idyllic surroundings. It is suggested, though cant be proved, that a small carving on a cornice inspired the NTs oak-leaf emblem.
Arundel
Did you know that Arundels Catholic Cathedral was built in 1868 and designed by Joseph Hansom - designer of the first taxi. Originally it was simply the Church of Our Lady and St Philip Neri. The Howard family, Earls of Arundel and Dukes of Norfolk , were very involved in the project, and six years after it was in 1965 designated a Cathedral the dedication was altered to Our Lady and St Philip Howard, the canonised 20th Earl.
Bosham
Did you know that it was supposedly at Bosham that Canute did his performance with the tide? Now a quiet little settlement, Bosham in pre-Conquest times was more significant: Canute had a palace there; and it was one of the few places deemed worthy of inclusion on a map in the Saxon Chronicle. Even if you didnt know the location, we bet you did know he was proving to flatterers that he was not all-powerful.
Brightling
Did you know that Brightling in Sussex contains many reminders of the extraordinary eccentric Mad Jack Fuller MP? They include his pyramidal tomb, in which legend had it he was buried sitting upright, hat on head with bottle to hand, and broken glass on the floor to keep the devil at bay; and an obelisk that was built as a memorial, but of what no inscription or record indicates.
Brighton
Did you know that Englands first casino opened at the Metropole Hotel Brighton in 1962? Well, the first on land  an earlier casino-ship on the Thames got round gambling laws for a time.
Did you know that Brighton Marina is the largest of its kind in Europe? It boasts 1600 berths and covers 126 acres (35 acres of which are land).
Chichester
Did you know that the oldest hominid remains yet found in Britain were unearthed at Boxgrove near Chichester? The leg bone of a pre-Neanderthal man was found at a quarry there in 1993; and has since been dated as half a million years old. A six-footer, he is thought to have hunted in a group on what was then the shoreline  but is now about eight miles inland. English Heritage has bought the site which is still being explored by archaeologists.
Did you know that Chichester Cathedral is unique in Britain in three very visible ways? It is the only such medieval building with a) an attached almshouse-hospital (St Marys) still in operation; b) a free-standing bell-tower; and c) a Marc Chagall stained-glass window (though in that respect it is outdone by little All Saints Church in Tudeley).
Crawley
Did you know that the church at Worth has what is probably the largest surviving Saxon arch in the world? The arch stands 22 feet high and 14 feet wide, of typical rounded Saxon design with solid impost blocks. It is thought the church of St Nicholas dates from the late 10th century, but some suggest it may be earlier.
Felpham
Did you know William Blake wrote 'Jerusalem' whilst living in a cottage at Felpham between 1800 and 1804? It was actually the preface to his sometimes strange work on Milton . At first he loved being close to nature there; his later experiences were not so happy  a disagreement with soldier John Scofield trespassing in Blakes garden led to accusations of sedition and eventually to Blakes trial for treason in Chichester , where thankfully the poet-painter was successfully defended.
Fishbourne
Did you know that Fishbourne Palace in Sussex is the biggest single Roman site yet unearthed in Britain? It covers six acres. The palace, as large as Neros Golden House in Rome, was constructed in the first century AD, and occupied until a disastrous fire in about 270AD. The greatest treasures of the site are its mosaics, which include the celebrated Boy on a Dolphin.
Gatwick
Did you know that Gatwick used to be a racecourse? It opened in 1891, and continued as such until 1940, even running the Grand National from 1916 to 1918 (the 1918 race won by Lester Piggotts grandfather by the way). Gatwick was first used for aviation in 1928 when one Avro 504 was kept there; the first scheduled flights were in 1934, serving Paris and Belfast. After much work during a near three year closure it opened as Gatwick Airport in June 1958.
Hastings
Did you know that the Battle of Hastings wasnt actually fought in Hastings but on Senlac Hill some six miles away? Harold chose his ground well, forcing the Normans to attack uphill; but eventually the Saxons gave in to the temptation to chase a supposedly fleeing enemy, abandoned their advantage and were routed. The ruthlessness that characterized William s reign began at once: Harolds body was denied a Christian burial, dumped into a makeshift seashore grave.
Pulborough
Did you know that the oldest bell in Britain is to be found at the church of St Botolph in Hardham near Pulborough? Though it is undated the still used bell is thought to be of an age with the church, built in about 1100AD. There can be few more striking examples of enduring craftsmanship.
Worthing
Did you know Oscar Wilde wrote The Importance of Being Earnest' whilst living in Worthing in 1895? This is why the hero of the play is called Jack Worthing. The author was spending the summer in the town with his family, having taken rooms for August and September at 5, The Esplanade. Its most memorable character also bears the name of an English town  (Lady) Bracknell ; though that was inspired by his lovers mother living there.