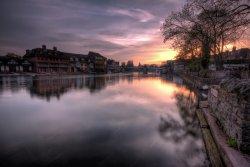 Ascot
Did you know that Ascot Racecourse was founded by Queen Anne in 1711. The first race  Her Majestys Plate  was run on August 11 that year, for a purse of 100 guineas. The racecourse remains the property of the reigning monarch, and of course hosts the royal meeting that is one of the great events of the season. Ascot, by the way, is a corruption of the original name of East Cote.
Colnbrook
Did you know that here in 1825 Richard Cox, a retired brewer, grew the first Cox's Apples in the orchard of his house on the Bath Road. Some of his original trees are still said to exist there.
Did you know that The Ostrich pub in Colnbrook is the third oldest pub in all England? King John stayed here on his way to seal Magna Carta in 1215 . It was established in 1106 by one Milo Crispin, and was originally named simply The Hospice (The Ostrich apparently a corruption of that name). Legend has it that a 17th century landlord, John Jarman, killed some 60 guests over a period of years, a hinged bed dropping them into instant death in a boiling cauldron.
Eton
Did you know that 19 of Britains 52 Prime Ministers have been educated at Eton ? David Cameron is of course the latest in a list that includes Robert Walpole , the Duke of Wellington , Harold Macmillan and William Gladstone . It has also produced a Thai Prime Minister and two Northern Ireland PMs.
Maidenhead
Did you know that when in 1838 Isambard Kingdom Brunel built Maidenhead Railway Bridge it had the widest and flattest brick arches in the world? Such were the doubts of the mere mortals heading the Great Western Railway that they had him retain the wooden framework used in constructing it, fearing the graceful design would collapse. The wood soon washed away in floods; the bridge still carries railway traffic.
Reading
Did you know that King Henry I is buried at Reading Abbey ? Perhaps not surprising given he founded it in 1121. He died in France, and his embalmed body had to be returned wrapped in hide to delay decay.
Did you know that Jane Austen attended what became the towns Abbey School? It was actually then called Reading Ladies Boarding School, and was located within the precincts of the Abbey.
Did you know that after John of Gaunt s wedding on May 19 1359 at Reading Abbey the celebrations lasted for 12 days? His wife was Blanche, daughter of Henry Duke of Lancaster. The Mayor of London arranged for jousting to celebrate the union  can we imagine Boris or Ken spending our money on such frivolities as public games to entertain the wealthy?
Did you know that Mapledurham House is the original setting for Toad of Toad Hall? E.H. Shepard s drawing closely resembles the building  though various others claim the honour too.
Windsor
Did you know Windsor Castle is the largest inhabited castle in the world? Successive monarchs from William the Conqueror onwards have had a hand in extending and altering the building. What began as a motte and bailey fortress to dominate the Thames metamorphosed over centuries  George IV in particular employing the architect Jeffry Wyatt (soon to rename himself the sexier Wyattville) to make changes a Disney designer would blush at  extra crenellations, more oriel windows, and another 30 feet or more on the Norman round tower.