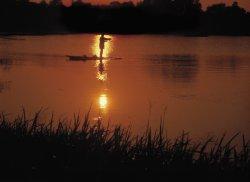 Ayot St Lawrence
Did you know that George Bernard Shaw is said to have moved to the village of Ayot St Lawrence in Hertfordshire because, concerned about his health, he noted an epitaph on the grave of a 70 year old woman there saying Her Time Was Short? He arrived when he was 50, and his death at 94 was brought about by a fall while pruning a tree, so he seems to have chosen well. His house, Shaw Corner , is now an NT property.
Hertford
Did you know that the first paper mill in Britain - Sele Mill near Hertford - was established by John Tate in about 1488? Its paper was used by, among others, the great London printer Wynkyn de Worde, business partner of Caxton . The existence of Tates mill is recorded in Henry VII s accounts in 1498, and books published in 1494 bearing Tates watermark still adorn some lucky shelves. Sadly it seems Tates pioneering business died with him in 1507.
St Albans
Did you know that St Alban was the earliest British saint? He was a pagan living in Verulamium who sheltered a fugitive Christian cleric in the 3rd century, deceiving soldiers hunting the man by exchanging cloaks and getting himself arrested. Impressed by the piety of the cleric Alban declared himself a Christian when brought before a judge, and was duly beheaded outside the town. The spot where he is said to have died is where St Albans Cathedral now stands.
Ware
Did you know that the first turnpike road in Britain was a section of the Great North Road (which much later evolved into the A1) north of Ware in Hertfordshire? Wadesmill was the point where tolls were first levied in 1663. In case you were wondering, turnpike refers to a pike (the weapon) used to bar the road before payment being turned to the side to allow entry after it.
Welwyn Garden City
Did you know that before Charles Blondin made his first tightrope walk over Niagara Falls he practiced near Welwyn? He was friendly with the decidedly eccentric inventor George Dering, who had inherited the estate of Lockeleys near that town, and the two of them made crossings of the River Mimram there  perhaps not as dramatic as Niagara, but prettier.