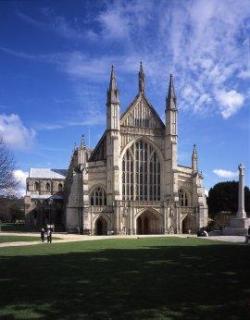 Basingstoke
Did you know that gabardine waterproof clothing was invented by a Basingstoke Man? His name? Thomas Burberry! Burberry was a draper who came up with a process for proofing yarn as well as finished cloth after a chance conversation with a shepherd. That mans clothing had seemingly become waterproof through contact with lanolin - he claimed during sheep dipping. Known as a fashion item now, Burberry gabardine was originally for outdoorsy types  at the most extreme end of that scale worn by explorers like Ernest Shackleton .
Emsworth
Did you know that not only did our greatest 20th century novelist P.G. Wodehouse live on various occasions in the Hampshire town of Emsworth; but that the house on Record Road where he resided was called Threepwood? He must have loved the place to have named two of his greatest characters, Lord Emsworth and his brother the Hon. Galahad Threepwood for it. Blandings Castle itself is said to be based on Apley Hall near Bridgnorth.
Hambledon
Did you know that the first English commercial vineyard of the modern era was established at Hambledon in Hampshire? In 1951 the grand-sounding Major-General Sir Guy Salisbury-Jones planted a one acre site with Seyval Blanc grapes, which duly produced their first crop for wine-making in 1954. It has recently been replanted with Champagne varieties, something of a trend of late after bright sparks noticed similarities in geology and climate with that blessed French region and the South Downs.
Havant
Did you know that Keats wrote The Eve of St Agnes, and spent his last night in England, in Bedhampton near Havant? In 1819 he and a friend walked there from Chichester in late January, and Keats already troubled by the first signs of TB had to recuperate at The Old Mill, guest of the wonderfully named John Snooks. Coincidentally a year later the ship on which he was bound for Naples had to shelter from storms near Portsmouth, and Keats revisited the friendly miller, passing his last night in England  September 28 1820  again as his guest.
Itchen Abbas
Did you know that Charles Kingsley had the idea for his book The Water Babies while staying in and fishing at Itchen Abbas near Winchester? The priest-professor-novelist was a regular visitor to the Plough Inn there, now The Trout. It is a caddis fly  the creature beloved of fly fishermen - that explains to the drowned Tom that he has become a water baby.
Portsmouth
Did you know that the first known dry dock in history was built at Portsmouth? It was constructed in 1495 during the reign of Henry VII . The ports links with royalty go back far further, however: it was Richard I who in 1194 granted Portsmouth its charter  he also had a dockyard built there.
Southampton
Did you know that Southampton is the home of the Spitfire Aircraft? It was devised by R.J. Mitchell, built and tested here and saved the country during the Battle of Britain . The prototype first flew from Eastleigh on March 5 1936 . More than 22,500 were built before and during WWII . When the government saw its capabilities 310 were ordered  a change of scale for Supermarine whose previous biggest order had been for 12 machines.
Did you know that Southampton was the first town in Britain to sample fish fingers in 1955? The cod strips in breadcrumbs were of course developed and made in Great Yarmouth .
Southsea
Did you know that the very first Sherlock Holmes story was written in Southsea by Sir Arthur Conan-Doyle ? It was called "A Study in Scarlet". Conan-Doyle was practising there as a doctor from his house in Elm Grove. There is another local Holmes connection: Dr Watson was based on a real doctor, another Watson who was a friend of the author, and President of Portsmouths Literary and Scientific Society, to which Conan-Doyle belonged.
Yateley
Did you know that in 1622 the then Archbishop of Canterbury, George Abbot, while hunting at Bramshill Park near Yateley shot and killed gamekeeper Peter Hawkins with a crossbow bolt? Naturally the inquest found it was the gamekeepers fault. After pressure from other clerics a Royal Commission investigated and equally naturally failed to reach a verdict. Youll now find the Police Staff College at Bramhill House. Dont know why that seems apposite.