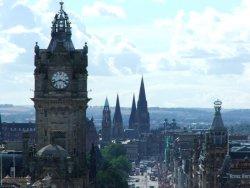 Edinburgh and the Lothians

Bathgate
Did you know that the worlds first major oil refinery was in Bathgate? Chemical engineer James Young developed a process to make paraffin for lubricating-oil from a specific type of coal  cannel  found in the coalfields around Bathgate. He and some business partners opened Bathgate Chemical Works in 1852, soon diversifying into lighter oils for lamps. They protected their techniques with a mix of security measures and patent cover, but in the 1860s petroleum products undercut them and their local raw materials were running out.
Edinburgh
Did you know that the Royal Botanical Garden in Edinburgh has the largest collection of Rhododendrons in Britain? The Edinburgh site dates back to 1670: it and the three gardens it owns around Scotland contain half of the plants known species.
Did you know that in 1958 the UKs first traffic cones were manufactured at Castle Mills Edinburgh by The North British Rubber Company, replacing paraffin lamps? Student pub crawls would never be the same again.
Did you know that Edinburgh has the only working time-ball mechanism in Britain other than the original at Greenwich Observatory? It is on the Nelson Monument on Calton Hill, and was installed in 1853 by James Ritchie and Son. That firm still retains the contract to maintain the device which drops a ≤ tonne wood and zinc ball down a pole daily to signal 1pm, originally to allow ships in Leith to set their chronometers.
Linlithgow
Did you know the Kings Fountain in Linlithgow Palace is the oldest fountain in Britain? The ornate structure dates from 1537, commissioned by James V of Scotland apparently as a way of impressing his new French wife. According to local legend when Bonnie Prince Charlie stopped off at the palace in 1745 wine replaced water  which would perhaps have suited that particularly useless would-be monarch. The Duke of Cumberland avenged the treachery by burning the palace in 1746.
Livingston
Did you know that the Asda Wal-Mart store in Livingston is the largest of its kind in Europe? The store opened in August 2002. The American retail giant Wal-Mart bought Asda in 1999, 50 years after Associated Dairies and Farm Stories Limited was formed in Leeds , the group getting into supermarkets in 1965 with the purchase of three such stores.

Famous Edinburgh and the Lothians people