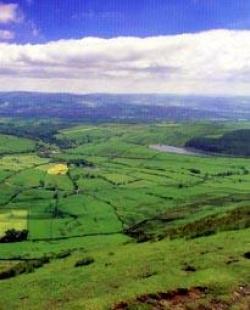 Blackburn
Did you know that Blackburn Rovers Football Club was formed by a group of public schoolboys in 1875? The two who called the inaugural meeting were Shrewsbury old boys; others attending were from QEGS in Blackburn and Malvern College whose quartered shirts were adopted by the new club  though with Cambridge Blue in place of Malvern Green.
Did you know legend has it that when James I stayed at Hoghton Tower in 1617 he so enjoyed his hosts hospitality that one night, over dinner, he drew his sword and knighted the beef? "Arise Sir Loin" he intoned, so naming this particular cut. The host, Sir Richard Hoghton, may have been too lavish a host  a couple of years after the visit he found himself locked up in the Fleet Prison for debt.
Bolton
Did you know that with 260,000 people Bolton is the largest town in Britain? Slightly larger than the smallest city, youll agree: St Davids in Wales has fewer than 2000 residents. Boltonians tried to win city status in 1992 for the 40th anniversary of the Queen s accession; in 2000 to mark the Millennium; and in 2002 for the Diamond Jubilee (when to rub salt in the wounds Lancastrian rival Preston was given the honour).
Burnley
Did you know that Britain's shortest river is the Brun which runs through Burnley. And Did you know that Burnley Miners Social Club sells more Benedictine than any other hostelry in Britain? Burnley buys roughly one in every three bottles of the stuff sold in the UK. As WWI ended local lads were stationed in Fecamp where what they dubbed Bene is made, and during the winter of 1918-19 got a taste for drinking it 50/50 with hot water, still the custom in the town to this day.
Carnforth
Did you know that Carnforth Station was the location in early 1945 of the filming of the iconic movie Brief Encounter ? The location was apparently chosen as well away from any likely air raids, and even though filming was done at night when regular train service had ended the crew needed bright lighting that could have attracted German planes had they remained in London . A deal seems to have been done with the railway company  no charge for using the location, but in an early example of product-placement London Midland and Scottish Railway posters and logos are visible several times.
Clitheroe
Did you know that in 1652, inspired to climb Pendle Hill near Clitheroe, George Fox claimed to have a visitation from God, later writing: From the top of this hill the Lord let me see in what places he had a great people to be gathered? Forty years earlier it had witnessed rather less holy goings-on, with the alleged activity of witches there ending in the famous Pendle Witch trials and executions. Fox began to lay down the foundations of the Society of Friends or Quakers.
Darwen
Did you know that the cockpit Perspex for Spitfires was made in Darwen? It was produced by ICI Acrylics in the town, and had indeed been invented at the plant. The tradition of aeronautical innovation continues in the town with several hi-tech businesses servicing the industry from factories there.
Lancaster
Did you know that the Lancaster Canal has the longest lock-free stretch of man-made waterway in the country? Either side of that ancient city, from Preston to the south to Tewitfield north the engineers followed a natural contour, allowing for 41 miles of carefree cruising through some beautiful Lancastrian countryside.
Morecambe
Did you know that John Osborne wrote the gritty Midlands drama that became Look Back in Anger while comfortably ensconced in a deckchair on Morecambe pier? He was appearing with a repertory company in the play Seagulls Over Sorrento there in the early summer of 1955, and penned the first draught of the largely autobiographical piece in just 17 days.
Preston
Did you know that Preston is home to Europes largest bus station? The 1960s Brutalist design can take 80 double-decker buses, and is regarded by some as of major architectural significance. Others think it possibly the ugliest building in Lancashire and question its location half a mile from the citys train station.