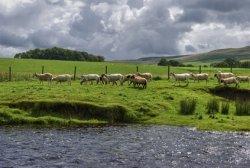 The Forest of Bowland

Is it sad that so few Britons know the Forest of Bowland, or great for those of us who do? Bowland covers a huge area, but it has few large settlements within its boundaries, perhaps one of the reasons for its relative obscurity, and certainly for its attraction. For town amenities Bowland has just beyond its borders historic Lancaster Clitheroe with its formidable castle, and the lovely market town of Settle. This is an area of great natural beauty, upland moors in the main, but with some ancient forest and running through it from east to west the Trough of Bowland, the deep cut valley carved out by glacial melt water. The Forest of Bowland was once a royal hunting ground, and much of the area is still owned by the Duchy of Lancaster  indeed the Queen supposedly said it is where she would like to live if she had the choice. The most famous hostelry in the Forest is the Inn at Whitewell, (pictured above) a lovely jumble of a place, the oldest elements of which date back to the early 1300s, and which once housed the keeper of the royal hunting grounds. It looks like John Buchan or his character Richard Hannay belongs here, a solid place with fine food and good fishing, but without pretence. Just a few miles to the south of Whitewell lies Chipping , one of the prettiest villages in Lancashire, with its sturdy stone cottages and intriguing little courtyards. Chipping has a range of accommodation to offer the visitor, from the suitably characterful Gibbon Bridge Hotel with its interesting mix of rural and gothic elements, to the top-end self catering available in the converted Wolfen Mill at the edge of the village, and the intimate comfort of The Bolt Hole, a cottage in its heart. The Eaves Hall Country Hotel is more Evelyn Waugh than John Buchan, with its elegant landscaped gardens, though it offers what some could call the best of both worlds, with two cottages in the grounds for privacy, and the use of the hotels facilities for comfort. The Forest of Bowland has had publicity of late as having one of the most beautiful bus journeys in the whole of Britain, something to note for the over 60s now bus travel is free for them. The B10 route from Clitheroe to Slaidburn winds around some of the backwaters of an already quiet area. Slaidburn is a good point from which to explore Bowland, and the traditional Hark to Bounty Inn there provides the equally traditional hearty breakfast that walkers and cyclists need to fuel them for the day and maybe set them up for a hike west to Bolton-by-Bowland, where similar a similar welcome awaits at The Coach and Horses. For those coming from the south the Forest of Bowland is far nearer than the Lakes, with the same natural charms that Lakeland has to offer. And for the time being fewer people are aware of it, so get there before everyone has heard of it! The Forest lies within the District of Ribble Valley