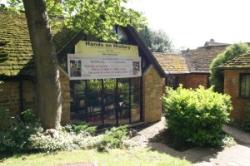 Visit Kettering's Heritage Quarter for a great family day out

Explore Kettering's history at the Manor House Museum. Up and coming programmes include a winter season of Ancient Egyptians in Jan to March 2005 and a Spring season of Tudors in April to June, both including a temporary exhibition, living history event, talk and children's activities. In the summer we are planning a Dinosaur exhibition, and the Autumn will bring with it a season of World War II, as we remember the 60th anniversary of the end of the war.

At the Alfred East Art Gallery there's a constantly changing programme of exhibitions, including for example an exhibition of Sir Alfred East's etchings in April 2005, and a national touring exhibition of figurative sculptures in June and July, called Archetypes.